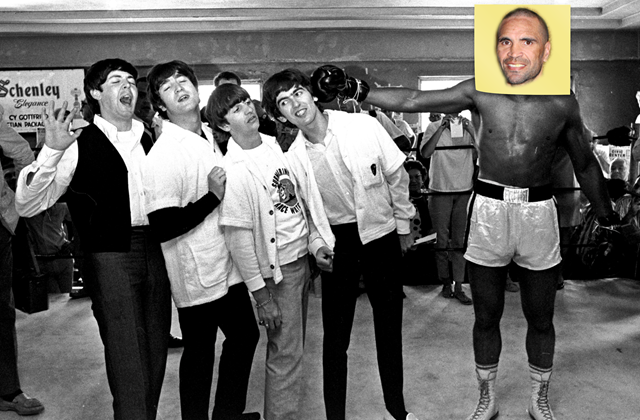 It’s happening again. Anthony Mundine is claiming he’s Australia’s greatest all-round athlete. He’s at it again because it’s not the first time he has made such a claim. Or boast, if preferred. It probably won’t be the last time either.

After effectively ruining the phrase of being “the man” for at least one generation, the former rugby league player and now current world title holding boxer, the WBC Silver Super Welterweight Champion, Anthony “The Man” Mundine is talking up his prowess.

“There’s no man that has done what I’ve done and crossed over sports like I have,” says the 39-year-old Mundine.

To his credit, he has successfully crossed from rugby league to be a world class boxer. It’s not like he’s a John Hopoate here. Although given Mundine’s mouth, where he can also go put his finger may not be that different for some boxing fans.

For a boxer to talk themselves up, is nothing new. Yet far too many try and copy Muhammad Ali’s words in ways which tend to make Rocky Balboa sound like a poet. From Mike Tyson’s “I want to eat his children” amongst his other choice quotes, to Mundine’s repeated boasts of his greatness. Their words tend to float more like bees and sting like butterflies. Which doesn’t really make sense, but by the same token seldom does their far-from-Shakespearean prose as statements either.

Elements of it, are of course gamesmanship. It’s not necessarily bragging and boastful, if the words are backed up with actions.

Today, Muhammad Ali is generally considered “The Greatest” boxer by most. However, at the time, many would’ve been detractors to his claim. The change of his name from Cassius Clay to Muhammad Ali, converting to Islam and being outspoken about it all, certainly wasn’t without controversy either.

Similarly, boxer Floyd Mayweather, Jr. claims to be “TBE” (read as “The Best Ever”). With his record of being undefeated to date professionally in the boxing ring with 47 wins, there may be more than just bravado here. He also has had his fair share of controversies in his personal life related to violence against women and there are those who call to boycott him. Yet he also has many who admire the lessons and principles he has to teach in other areas of his life.

Where Anthony Mundine fits into this, apart from his conversion to Islam (in 1999) somewhat echoing Muhammad Ali – again maybe suggesting emulation instead of originality – remains to be seen.

As was pointed out, he’s not the first Australian sportsperson to successfully crossover sports at the elite level. With names such as Dick Thornett, Michael Cleary, Keith Miller, and Ray Lindwall, all offered as counterpoints to Mundine’s claim.

“With respect to them all, I think I’m the best,” was Mundine’s response. Followed by: “No-one has walked my walk.”

So he’s certainly not the first Australian sportsman to have crossed over sports; and as above, the walk he is walking may not be entirely untrodden before either. Suggesting that’s two strikes landed on him and his claim of unequalled greatness.

Plus at least within a sport, other names are upheld as sporting greats. Including Don Bradman, Dawn Fraser, Evonne Goolagong, and Layne Beachley, to name but a few. Within the various codes of football, names such as Adam Goodes, John Eales, Andrew “Joey” Johns, and Harry Kewell, all likely come to the minds of respective fans regarding some of the best and greatest players.

When it comes to greatness in sport, Mundine’s name seems to be more mentioned by Anthony Mundine here than by others in this regard.

Perhaps this is part of the problem.

Maybe it’s time for Mundine to move on from the past. Yes, he was a good rugby league player. Or at least a highly paid one, at the time. That was near 15 years ago. If he’s a boxer now, and he is, focus on that. For many, Mundine is a polarising figure: the man is talented, and also a braggart. At one point even stating that he was considering becoming a decathlete.

With Mundine, there has been a lot of crying wolf. He has long been an underdog, but people appreciate the fight in the underdog which overcomes the challenge. Do that, and it’s empty bravado no more.

As a sportsman, what do you think of Anthony Mundine? Is he truly the man, or another also-ran? Answer the uthinki question below, gloves on or off, it’s your choice. Then a guess about others. Followed by having confidence enough to decide.