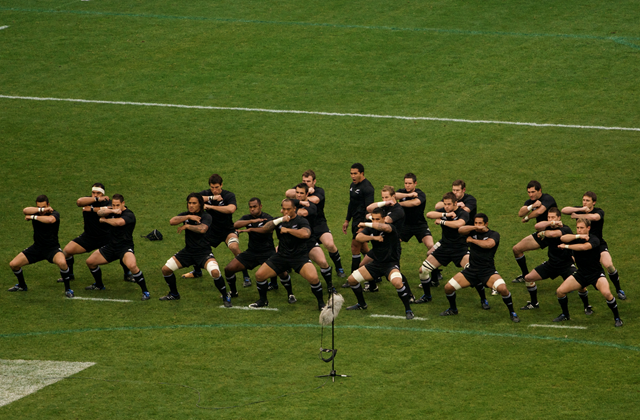 Ban the Haka from Sport?

It’s bold, could be in the faces of others, and maybe it’s even a little intimidating. It’s the haka. Traditionally a dance by the Maori people of New Zealand, it has been used as a war dance or challenge. Though in various forms it has also been used as a greeting or ceremonial acknowledgment. The haka is not one thing, but many of a particular form.

The haka, although coming in various forms, when used on the sporting field is more akin to its war dance and challenge origins. Acts of stomping, slapping, yelling, poking the tongue out, and showing wide open the whites of the eyes, all have primal physiological and psychological elements which serve to intimidate. Loud noises. Appearing bigger. Both coupled with many people moving in unison as though one, have the emotive and sensory overload capacities to achieve intimidation and resultant fear as though a threat.

More visceral perhaps, is the “Kapa o Pango” variation. Introduced in 2005, it saw the addition of the move which draws the thumb across the throat. A move which some considered as signifying slitting the throat of the opposing team, and crossing the line between sportsmanship and outright thuggery.

Yet, overall performing the haka is considered both traditional and culturally significant. The drawing of the thumb across the throat may also be interpreted as “hauora”. Drawing the breath of life into the heart and lungs.

All of which creates a rather interesting situation. Shielded as it is by culture.

It may be that the haka must be performed at a mandatory distance on the sporting field to diffuse the potentially confrontational nature of it. Especially when it would otherwise be directly in the collective faces of the opposing team. Which should the team respond to the haka in any way other than standing their ground and no more, may render them as being anything from unsporting, provocative, weak, or worse – culturally insensitive and disrespectful.

Calls to ban the haka (from sport or otherwise), are also coloured in a similar way. In the belief that the haka is an important part of the New Zealand culture in general and the heritage of the All Blacks in sport. Banning it doesn’t speak too highly as far as freedom goes either.

Though the haka has made its way into popular culture, this has not been without controversy. Often performed in support of the sports teams by their fans, these actions have also been deemed by some Maori leaders as bastardising and hijacking the traditions of the haka.

Other New Zealand sports teams have at times performed the haka, with mixed views received. Similarly there have also been dances akin to the haka, performed by the sports teams of other Pacific island nations and cultures.

So altering the haka, even if it has happened already, is seen as a breach of tradition. Both sporting and culturally. Questioning the haka – or worse, poking fun at it – doesn’t seem to help much either, from any side’s view. Traditions were once new ways, but they survived and were repeated to become old ways. However, repeating a war dance to the point of regular spectacle may just make it another example of the boy who cried wolf: people stop taking it seriously.

Apart from all this, the haka also has the advantage of acting as a kind of warm-up before the game.

It may be that the haka could stay in the change room, like many other pre-game rituals.

On the sporting field, is it better to simply accept the haka, while otherwise internally ignoring it? Which may suggest being ignorant as well; or that political correctness has gone too far.

Should each of the teams be given the opportunity, if desired, to perform their pre-game ritual on field? Though does this simply turn it all into something instead more akin to a dance-off? Potentially then diminishing the haka further from its traditions, maybe seeing it as little more than grown men (and women) stomping around and poking their tongues out. And again, cultural insensitivity raises its voice.

What are your thoughts on the haka, both on and off the sporting field? The issue is neither all black nor all long white cloud, so debate away in the grey zone. Have your say in the comments. And answering the related uthinki question, to learn what others think of the haka, is but a press of the button below away.