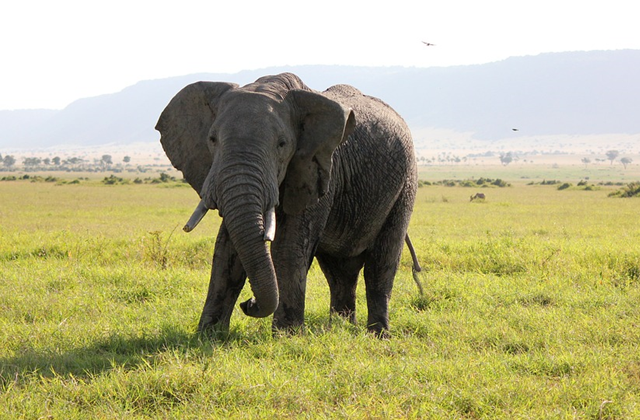 Tim, one of the oldest and largest bull elephants in the Amboseli National Park in Kenya, Africa, made good on the scientifically validated statement that an elephant never forgets.

The male elephant had been wounded by a spear, and sought out human help.

Tim had already been speared once before, in the rump, back in the 2014. He needed human help then, and vets aided his recovery.

Wounds on the 47-year-old elephant in 2016 included a piece of metal sticking through Tim’s ear and a bleeding injury on his forehead.

With the aid of the Kenya Wildlife Service (KWS) and the Amboseli Trust for Elephants (ATE) amongst others, Tim was tracked, and upon daylight was tranquilised for vets to tend to his wounds.

The Big Life Foundation was also involved in helping to heal Tim, stating that:

“To all our relief, the spear wasn’t poisoned, and had gone through the ear and merely scratched the skin underneath. Within five minutes, Tim was up and heading back to the swamps in the middle of Amboseli.”

Tim, is what is known as a “tusker” an elephant with tusks that each weigh at least 45 kilograms (100 pounds).

However, it seems he was not attacked for his tusks.

The David Sheldrick Wildlife Trust believes that Tim’s wounds weren’t caused by ivory poachers, but as a result of people living near the national park. Where human settlements and animal habitats encroach upon one another, resulting in conflict at times around Amboseli.

The Kimana Corridor has become a high-pressure area where the conflict between humans and elephants is due to changing land use patterns; something which is claimed by Big Life to currently be a more significant threat than hunting (which is still legal in parts of Africa) or ivory poaching in the area.

The good news is, Tim is expected to make a full recovery, but he is far from the only elephant or animal to suffer from the human-wildlife conflict in Amboseli at the moment.