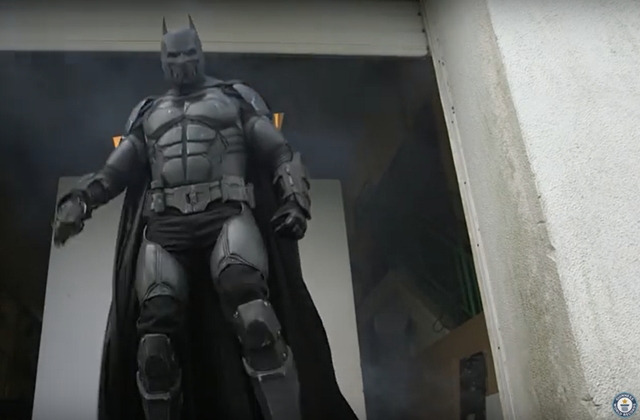 Cosplayer Julian Checkley has remarkably managed to combine both form and function into cosplay with his fully functional gadget-equipped Batsuit.

Apart from obviously sporting the mother of all utility belts, his costumed efforts also managed to secure him a Guinness World Record for the “Most functional gadgets on a cos-play suit”.

Numbering 23 isn’t some cryptic clue from the Riddler, instead it’s the number of fully functional gadgets on Checkley’s Batsuit.

Maybe it’s not quite as large a number as Robin’s 356 “holy something” remarks, but 23 functioning gadgets should be more than enough to take even Adam West’s version of Batman safely camping.

Batman lightening up, or darkening further, the DCEU movies may be another matter entirely.

Besides, Checkley’s Batsuit likely beats the homemade version of the mecha-armour Batsuit with the hammers of justice.

For those wondering, yes it is equipped with a “concealed laryngeal microphone” which could be the perfect accessory for mastering the Batvoice in an entirely different way to Christian Bale’s time in the cowl.

While this cosplay Batsuit doesn’t have gadgets such as Batnipple enhancers, or a pimped out Batmobile, it still has more than enough to make the catwalk:

Sure all those gadgets would’ve been more readable as a list, but a list is hardly compact and doesn’t fit as easily.

Lest all these tactical gadgets pose the question about why so serious, answer this instead: