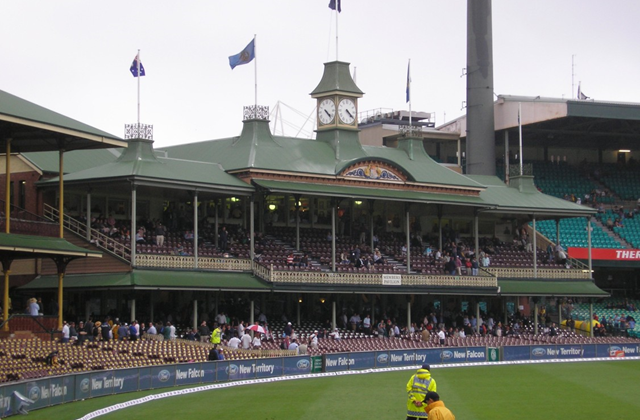 Adam Goodes, as sportsman he courts greatness in AFL. Outside of sport, he’s both famous and infamous. Depending on who is asked, and about what topic.

It was during the first game of the AFL’s Indigenous Round, when Adam Goodes of the Sydney Swans engaged in a war dance, or war cry, in front of Carlton Blues fans at the SCG.

He had just kicked a goal, putting the Swans at 57 versus 10 for the Blues.

Blues fans were none-too-impressed by Goodes’ war dance and war cry. Responding with a series of boos and jeers. Amongst other things. Some of which were taken to social media. Some of the less profanity laden tweets can be read here.

Speaking after the match, Goodes said there was nothing untoward about it. Nor towards the Blues fans. That the war cry was to celebrate his Indigenous heritage, saying he was “proud to be Aboriginal and represent.”

All sides have weighed in on the matter.

Few seem to have any genuine problems with Adam Goodes being proud of his Aboriginality and Indigenous heritage.

As for the crowd’s response when Goodes’ war danced and war cried in front of them, several things:

They were fans of the Blues, they’re hardly likely to cheer when their team just had a goal scored against it by the Swans.

They could have been booing at any combination of:

The interesting thing about it though, is what place does a war dance have in sport?

Although not strictly a war dance, the haka has had its place in sport questioned.

Obviously there are elements of sporting competition and rivalry between sporting teams. It’s often part of the game. Yet there’s also at heart the sense of being a “good sport” despite the marketing hype of “warring” sports teams.

So what place does a war dance have in the modern game of sport?

Presumably a war dance, would’ve been associated in the past with war.

In the case of an Indigenous war dance, subsequent acts of the members of one tribe fighting against and possibly killing members of another tribe were likely the result.

Yet this may be too far in the past to cause any real offense. It’s blurred and obscured by the mists of time. So much so, that it’s referred to in terms of “culture” and “heritage” and such things are often sacrosanct in today’s society.

Goodes being proud of his heritage really can’t be questioned. It doesn’t really need to be questioned either.

Plus if his intent, and the context of the war dance itself, was a tribute to Indigenous peoples and the under-16 Boomerang sports team, then can it really be faulted?

It was a war dance though.

What if the war dance, or similar act, were associated with a war more recent in memory?

Although at the extreme, and unlikely something from the past to be proud of, if a sportsperson goose-steps and salutes (such as Mark Bosnich did) they are likely prone to all sorts of penalties and a slew of negative commentary. Even when fully intended as a joke, such actions are often viewed as indefensible, in sport or otherwise.

Could it be defended though, that these were also part of a Nazi war ritual, and the sportsperson was proud of their German heritage?

But it does give pause for thought.

War dances, cries, and even salutes, have war and its actions associated with them. It may be a matter of how far back in the past that the war in question was, as to whether it’s too sensitive of a topic or wrapped up in heritage beyond question.

Even the giving of the finger, and later the upraised index and middle fingers in a V can be said, in part, to trace their heritage to wars past. Though likely questionable, in one form the fingers in a V is said to have been the proverbial “up yours” given to the French in the Hundred Years’ War as English archers shot their longbows by pulling the strings back with their index and middle fingers. The full facts of the matter are well obscured by the past. Such gestures are nonetheless treated, and often intended, as insults today. However, the two fingered V turned the other way can also mean “peace”.

So if the intent was as a tribute to heritage, would such war gestures be acceptable on the sports field?

It may well be a question of what people consider obscene. Or warlike.

Looking at Goodes’ display in celebrating the goal, was it really that offensive or apparently violent?

Had it not been labelled as a “war dance” and “war cry” were the gestures even that suggestive of anything related to war?

More to the point, if someone on the sporting field makes a particular gesture, is it acceptable for the crowd to respond back in a similar manner?

Perhaps with that, Goodes’ own statement today may be best:

“For me it had to be towards opposition and say here I am, take me as I am.

“Guys can cheer, boo, whatever. Take it as it is.”

Speaking of taking it as it is, answer the uthinki question in the button below to help make the most popular opinion about the matter whatever it may be: