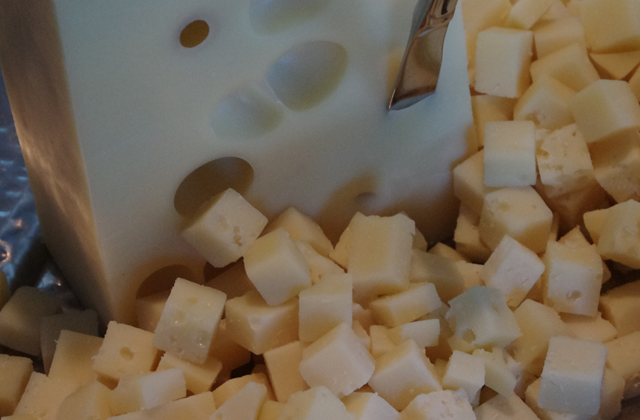 Why exactly Swiss cheese has holes has been a mystery a long time in the solving. Near a century of research has gone into finding the vexing answer. And recently, the answer finally arrived.

Mice around the world rejoiced. Finally vindicated of being wrongly accused of putting the holes in Swiss cheese. Some may have even been in hiding, as kabbas in the Karni Mata Temple in India, under a rodent witness relocation program.

It also debunked other, stranger, theories. Like the Swiss injecting air pockets of neutrality into the otherwise weighty cheese. Possibly with the holes then serving as safety deposit boxes for secret Swiss bank accounts. Because no-one ever suspects the cheese.

Indeed, recently it has been quite an epochal time in the world of cheese.

To the solution as to why Swiss cheese really has holes.

Beyond mice and Swiss conspiracies, the initial and seemingly most plausible scientific answer, dates back to the year 1917. When a study by William Clark drew the conclusion that in Swiss cheese, the holes were caused by bubbles of carbon dioxide released by bacteria in the milk.

Scientists from Agroscope now believe they’ve found the true cause of the holes:

When cows are milked, hay particles end up in the milk.

With the hay particles in the milk, this then results in bubbles in the cheese making process as the cheese ripens, and the consequent holes in Swiss cheese.

Including in the famously holed Appenzeller and Emmental.

As the scientists at the Swiss agricultural research centre Agroscope found, the thing was, over the past two decades or so, the holes in some particular Swiss cheeses were mysteriously getting smaller and fewer.

In some cases the holes were disappearing altogether, and what’s Swiss cheese without its holes?

Beyond being Swiss Gruyère, that is.

The reason for holes disappearing from Swiss cheese was in fact, something hipsters and Luddites are fond of telling people about the dangers of:

With modern methods of milk extraction and sealed machinery, gone are the idealised days of Swiss milk maids (all appropriately named Heidi) yodelling and milking cows by hand into buckets.

“It’s the disappearance of the traditional bucket,” said Agroscrope spokesman Regis Nyffeler. Noting that modern milking methods: “Completely did away with the presence of tiny hay particles in the milk.”

No hay particles equals no holes in Swiss cheese.

Which may usher in a revival of the traditional ways, with more handcrafted and artisan cheese making methods.

All of which should be giving the milk at least a bit of a roll in the hay.

In the name of holes for Swiss cheese, of course.

Whether the same also holds true for Jarlsberg cheese could shine some unwanted light on a closely guarded secret about Norway’s famous cheese. Bacteria, Propionibacterium freudenreichii, is said to give Jarlsberg cheese both its nutty flavour and its holes. However, could hay particles also be at work here?

It’s an hypothesis to test another day.

Best pondered in the Cheesecave. Or an ordinary cheese cave. Or just a somewhat dank and dimly lit room. If lacking billionaire funding and a secret identity of a cheesy nature.

But the cheese platter of discovery doesn’t end there. Not even close.

There’s a cheese-related uthinki question waiting, possibly bubbling and creating holes, in the green button below: