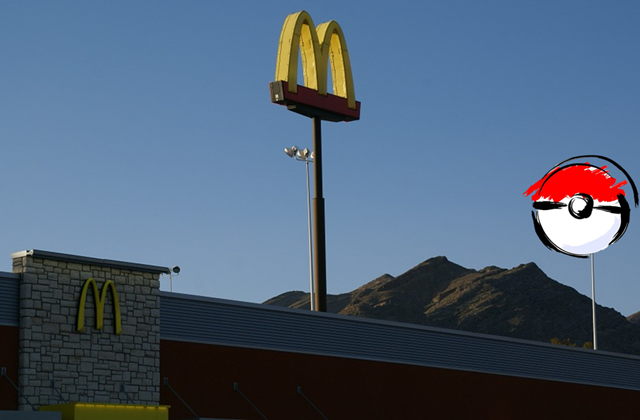 There’s secret sauce and secrets in the source code of Pokémon GO.

Hinting that the app, developed by Niantic, may have Pokémon GO partnering with McDonald’s in the near future.

For those who’d like fries with that, evidence of the order is evolving.

Spotted by industrious Redditors using Reddit (obviously) and reported by Gizmodo, the Pokémon GO game code makes reference to “Sponsor.MCDONALDS.POKEMON_STORE” as shown below: The Pokémon GO app is free to download (available from the App Store and Google Play), and is what Niantic describes as a “real world game” requiring players to walk around physical locations for the full Pokémon catching experience.

Niantic’s CEO John Hanke has previously mentioned the use of sponsored locations as part of the monetisation strategy used on the business side of things for Pokémon GO, in addition to the more traditional in-app purchases.

While Hanke was coy about specific company sponsorship deals, in the Financial Times he did offer up that he expected sponsors would pay Niantic:

“To be locations within the virtual game board – the premise being that it is an inducement that drives foot traffic.”

Although that neither confirms nor denies McDonald’s involvement, sentiment seems that the restaurant chain (along with the convenience of its almost ubiquitous urban locations and in-store free Wi-Fi in selected locations) will likely function as sponsored PokéStops where items such as Pokémon Eggs, Berries and different Poké Balls are likely to be found.

A “well-placed source” has since updated Gizmodo seemingly confirming that every McDonald’s will function as either a PokéStop or a [Pokémon] gym. It is suspected this will first occur in Japan, but the debut country and rollout in the countries to follow is yet to be officially confirmed.

The viability of other related ideas out there dwindles dramatically however.

While it might be acceptable to battle Pokémon, eating them at sponsored restaurants isn’t likely on the menu. And it could get downright weird with the Grass-type Pokémon. Vegans would be against eating them, but vegetarians might find themselves oddly conflicted.

Since it has somehow now gone there, time to bring it back to more the family-friendly playgrounds of Nintendo and McDonald’s.

Of the first generation Pokémon characters, below is shown from left to right: Pidgeotto; Mr. Mime; Jynx; and Snorlax. Then there are the McDonald’s characters, shown below from left to right they are: Birdie; Ronald McDonald; Hamburglar; and Grimace. Image via: Liz and Laura

Keeping all of them in mind for a business mash-up that could be bigger than a supersized Super Smash Bros., consider this more acceptable type of conflict: