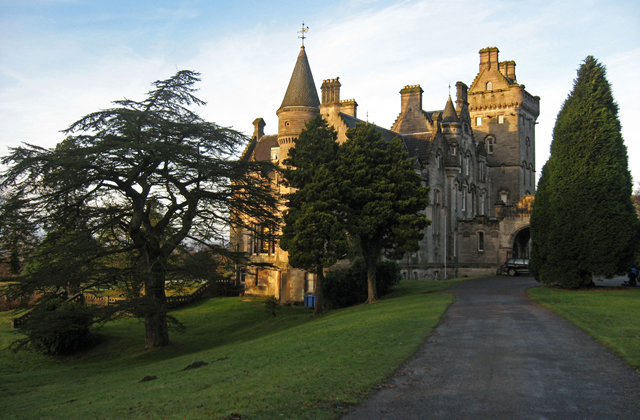 The Overtoun Bridge in Milton, near Dunbarton, Scotland, has several dark secrets and a shroud of mystery to it. That some 600 dogs have reportedly leapt from Overtoun Bridge, with over 50 canine deaths occurring over the past 50 years, only adds to the enigma.

The supernatural and the scientific have both had their say about the matter.

In 1931 Lady Overtoun passed away, and some locals suggest that her sadness still lingers the grounds, and the Overtoun Burn stream and gorge the bridge spans. With the dogs sensing this paranormal activity, and that the bridge itself is haunted. That the area represents a “thin place” according to Celtic lore, where the veil between the worlds of the living and the spirits have been known to crossover and into one another.

Adding to this, is the case of Kevin Moy. Who in 1994, threw his newborn baby son from Overtoun Bridge. Amidst claims that the child was the Antichrist, the Devil, and Satan. The baby boy died the next day from the injuries sustained by the fall. The father also attempted to jump off the bridge himself, and later that day slashed his wrists at Overtoun House in an unsuccessful suicide attempt. He was subsequently arrested, and declared insane.

Author Paul Owens, believes that Overtoun Bridge is in fact the Rainbow Bridge of Norse mythology. A bridge spanning between Midgard (Earth) and Asgard (the realm of the gods), and the dogs are sensing this portal between the worlds. Or the bridge between Heaven and Earth.

Speaking to The Huffington Post about Overtoun Bridge, Owens said:

“I was up there one summer’s day and I felt a very strong jab – like a phantom finger – twice in my back. It was the sensation you get when you fear someone might push you over the edge of a train platform.

“It’s a very strange place. One of the things peculiar to the location is that it can seem very peaceful and tranquil, but it can turn at a moment’s notice.

“You can experience great joy, but at the flick of a switch you are filled with horror and terror, I’ve felt it and I’ve seen it happen.”

The mystery deepens further because all of the dogs that have reportedly jumped from Overtoun Bridge, have been of the long-nosed breeds of dogs.

Which may suggest it’s less to do with the paranormal, and more worldly explanations such as a particular breed of dog’s temperament, prey drive, and sense of smell and hearing may hold the key as to why some dogs leap from Overtoun Bridge.

In 2005, Donna Cooper’s dog Ben, a Border Collie, leapt from the granite parapet of Overtoun Bridge, falling some 15 metres (50 foot) onto the rocks below.

As Donna Cooper recalled it:

The notion of the dogs committing suicide by jumping from the bridge, holds little, if any, scientific weight.

“A dog doesn’t have suicidal thoughts. It would have to know and understand that by jumping from that bridge, the consequence will be that it will end the suffering it is feeling, which is highly unlikely.”

There was also the suggestion, that the dogs were picking up on the suicidal thoughts of their owners. However, of the dogs which jumped off Overtoun Bridge, none of their owners have been revealed to have had suicidal tendencies at the time.

There is a further element of scepticism related to the notions of animals being psychic. For example, the views held by Dr Richard Wiseman, remain highly sceptical of the work of Dr Rupert Sheldrake regarding notions of psychic-like dogs and the unexplained powers of animals and morphic fields.

The massive drop from the bridge, which is obvious from the height of a human, is unlikely to be realised by a dog until it’s too late.

In general, dogs are typically reluctant to jump an object (such as a solid fence) without knowing what is on the other side of it. Whether that’s visually at the time, or through prior experience and familiarity with the area.

However, this sensible hesitance can be completely disregarded by a dog if it is in chase mode. Often as the result of its senses being overwhelmed and utterly focused on the task at hand.

Think about a dog that is normally obedient and comes back when called; yet it ignores its owner completely because it is chasing a cat.

Or, in the case of Overtoun Bridge, it’s more likely the scent of mink according to Dr David Sands. He noted that the bridge created both visual and sound barriers to dog, with a potential optical illusion caused by the ivy growing along the bridge wall. Plus there’s the sound of continually rushing water.

It’s sensory overload, and dogs detect the musky scent of the mink. Which the dogs preferred in controlled tests performed by Sands.

As Sands said about Overtoun Bridge:

“When you get down to a dog’s level, the solid granite of the bridge’s 18-inch thick walls obscures their vision and blocks out all sound. As a result, the one sense not obscured, that of smell, goes into overdrive.”

Dr Sands also notes that there is evidence of mink in the area around Overtoun Bridge. Checking the records of dogs’ deaths from the bridge date back to the onset of mink farming in the area.

Although Dr Sand concedes there’s no definitive answer as to why the dogs leap from Overtoun Bridge, and it’s likely a combination of factors, he believes it’s a case misadventure rather than canine suicide.

Although dogs have superior hearing to humans, there appears little by way of abnormal acoustics or ultrasonics which could explain why some dogs jump from the Overtoun Bridge.

From the belief in the paranormal and spiritual, to sceptical views that are worldly and scientific, many explanations have been offered as to why some dogs jump from Overtoun Bridge.

Are the dogs jumping for reasons of suicide or is it more simply accidental in nature?