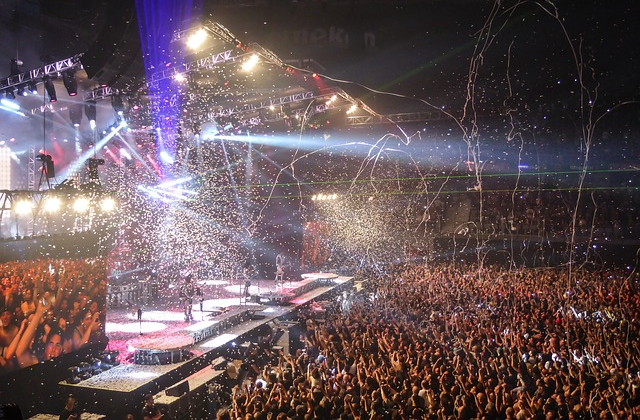 The Six Most Annoying Types of People at Concerts

Concerts and live music can be fantastic. The sense of not just listening to the music, but being there. Experiencing it. Feeling the music.

Although the crowds and characters will vary with the style of music and concerts, there are bound to be the certain few which annoy.

There could be more, but here are the six most annoying types of people at concerts:

It’s not really this person’s fault. They were born that way. Quite simply, they’re tall. They’re also probably a male. And more to the point, not only are they tall – more specifically – they are taller than you. The Taller, somehow, also almost always manages to stand directly right in front of you. Like gravity, they’re almost always there, eclipsing the show. And somehow all you can do is futilely attempt to circle around them. The stage and band are the dark side of the moon. They’re there. Somehow beyond, but you’ll never see this other side and will only hear stories of it. Why watch the band play, when you could instead watch the back of someone’s oversized head and torso? At least you can still hear the music.

The redeeming feature of the Taller, is that they can serve as a human shield and speed bump for things such as crowd surfers. You may be watching the back of some guy’s shoulders, but your neck may thank you come tomorrow.

If the Taller is doomed to always be in front of you, the Screecher poses the opposite problem. They’re unfortunately always behind you. It’s not that they’re just behind you though. In a way which truly defies all logic, their mouth is somehow always perfectly positioned to scream, yell, and screech directly into your ear throughout the entire concert. Worse yet, they’ll screech the band’s name in all the dull moments. Do anything but whisper sweet nothings into your ear. They’ll also attempt to sing with off-key, out of tune, and often just plain wrong lyrics for the whole gig. You’ll hear every single syllable. Every. Single. Syllable. And louder than the band as well.

Finding a redeeming feature for the Screecher? It’s tempting to say they have none. About the only silver lining to be found, is laughing at just how damn wrong the lyrics are that they’re screeching into your ear. Appreciate the irony at the time. Use it to offset the impending deafness and divorce the ringing in your ear later on.

This is a strange one. Similar to the dignity of a groupie. The Phoner is at the concert, but at the same time they’re not really there. The same cannot be said of their phone though. It’s there, in full view, capturing every moment of the gig. There may not be that much wrong with the Phoner, with the exception of their vicarious existence. Having paid good money to attend the concert, their entire experience will be through their phone. Status updates on social media. Taking photos and recording videos. Maybe a message or twenty. That’s what it’s all about. Don’t live in the moment. Instead relive it afterwards on a small screen. Because the Phoner has proof their phone was at the concert. With their arms upwards, they can also detract from the view. Once selfie sticks start making their way into concerts, you’ll know the Phoners have truly gone too far and dialled their lives in.

If the Phoner is to do any good, it must be through their phone. Surprise. Fortunately with their desire to record and share everything their phone has done, or they’ve done for their phone, the evidence is there online. So if you’ve ever missed a concert, the Phoner has delivered the experience to you for free. Or at least for the cost of a few views and likes. Because that’s the currency of the Phoner, and you too can have the same detached concert experience as them from the comfort of wherever you have internet access.

The Dreadlocker is simply a unique individual. What better way to show off your individuality and nonconformity than to have a collection of stinking ropes of hair hanging from your head? Take that society. At concerts, the Dreadlocker will tend to writhe and thrash around. It’s their dancing style. With this comes the deadly flicks of the head, propelling their hair like whips of hessian ropes. Always landing fair across your face. It’s not their first rodeo either. The dreadlocks being whipped across your face are barbed with beeswax, and the collective sweat and filth of many a concert before this one. It’s the torturous whiplash of another’s hair into your eyes and mouth. Probably perfumed with the zest of many an unwashed before you. If the Dreadlocker is nearby, know that you will taste all that it is savoury. And unsavoury. Force fed it, in the form of roped hair.

The Dreadlocker can really only be used strategically. If you yourself are one of them, space around you is but a few floggings away. For the rest of the folk, know that concert goers are aware of the Dreadlockers, and generally will not want to be near them. If push comes to shove, it may create eddies in the crowd which may be used to your advantage. Another trick, if the dreadlocks are long enough, is to tie those ropes of hair to things. Use this knowledge wisely and proceed with caution. These gorgons tend to have an awful stare if you’re caught.

The Sweater, similar to the Taller, is probably a male, but the Sweater tends to come in two distinct subspecies. The Sweater could be either: Hairy, with sweat seeping like an unwanted musk and luffa combination across, and dripping from, their body even if they’re not in the shower. Hairless, with sweat beading and glistening across their skin like drops of putridly warm dew, just waiting to drench forth. Both types are but a single movement and splash away from covering you in their salty lather. Either way, expect a veritable dead sea and flood of biblical proportions. It’s just a question of choosing your poison, because there’ll be plenty of fluids to wash the concert down with. As the band plays on, the Sweater will literally be dripping with sweat, drenching and all but drowning those nearby. It’ll be like waterboarding, but less pleasant. How long can you last?

An advantage of the Sweater may be that, disgusting as it is, their sweat may actually help to cool you down on those hot summer concert days. Treat it like the public swimming pool. Never admit to using it, and swallow nothing. The secretions of the Sweater may also make for an easier and slipperier getaway from the mosh pit if need be. Use cautiously and at your own risk. Beware of hawkers before the concert selling supposed essence of Sweater. It must be collected and used fresh from the source. It’s all or nothing. Imitations abound.

The Fainter has gone hard, but now it’s time to go home. They tend not to last long at concerts, the brave little souls that they are. It could be due to their inexperience, size, dehydration, or them possibly having dabbled in extra-curricula substances around the time of the concert. They can be hard to identify at first glance. But a bit like a bad piece of fruit at a supermarket, once you know what to look for, you’ll be able to spot them from a distance. Then it’s just a question of how long it’ll be before they end up soft and rotten on the concert floor. Naturally you should do your duty and lift and help to crowd surf them to safety. Even if others are tempted to kick them out of the way, and crush or trample them underfoot. Which means the responsibility again falls to you, and goodbye prime position.

Beyond offering an opportunity to do the right thing by them, can the Fainter do anything else? Isn’t doing the right thing supposedly reward enough. No answer required, because just as nature abhors a vacuum, so does concerts. The trick is to use the Fainters tactically. As people rush to help them, and clear some space, that’s your chance to slip into the gaps. Edging ever-closer towards front row, centre, before the band and into the glory of concert victory.

Were all the most annoying types of people at concerts covered, or were some left out?

Maybe there are even enough unstated for another list, or at least for the inclusion in the comments below.

In the meantime, answer the uthinki question. And the band played on.