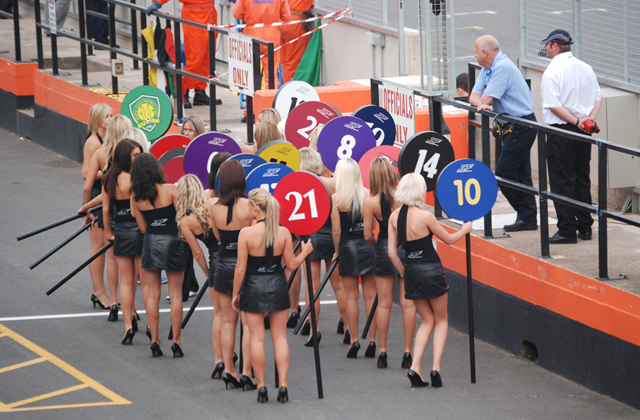 Grid girls are to be banned from the 2015 season of the FIA World Endurance Championship (WEC).

Short shorts and other such things are out the door, and it’s going to be about racing and motorsport only.

Gentlefolk, start or stop your engines. It’s up to you.

One commentator on The Roar believes this a progressive move in the right direction for motorsport. Although raising some decent points, the comments are of course opinion; and also biased, as opinions are prone to be. The telling thing, is the inference of the following statement:

“The AFL, for example, moved away from dancing cheer girls years ago. Part of its wider appeal in terms of crowds and television ratings is its openness to all. Thirty-five per cent of AFL club members are women and families are drawn to AFL games more so than any other code in Australia, judging by their record crowd figures.”

Attributing AFL club memberships at 35 percent females and family attendance at games to removing dancing cheer girls, is a bit like suggesting that since banning cheerleaders, shark attacks have increased 350 percent in Australia. Complete and utter nonsense that one is causing the other.

Why not segue into talking about the beach as well then, because although the grid girls may be dressed up to look attractive, what they’re revealing is likely a lot less than could be seen on an average beach. Rumour has it, on these beaches, some males may even walk around with their shirts off as well. Families also attend these beaches, and as far as public beaches go, they too are essentially open to all.

Now for a passing reference to the correlation between beach attendance and clothing. Ignoring any impact the weather and temperature, or the existence of a body of water to swim in, may have.

Never mind what can be seen beyond the beaches, like on a night out on the town. Or even on the internet. Relative to what is out there, while the intention may be suggestive and attractive, are the grid girls really that hypersexualised?

Isn’t this all part of the glossy magazine style of marketing and promoting apparently desirable qualities? Oddly enough in motorsports, the vehicles racing have shiny paintjobs and are highly presentable. Even if that’s unlikely to help them win the race. It’s all part of the polished image.

Like it or not, sport is also selling entertainment.

If, as claimed, motorsports are an arena where males and females can compete on equally footing, then let this happen.

However, regarding banning grid girls, one hand is not washing the other here. They’re going in opposite directions.

If it’s progressive to allow female drivers, female pit crew, and females in other roles, into motorsports, then isn’t it actually regressive to ban grid girls? Rather than taking something away, which some may consider as a liberty or freedom because it’s theirs to choose, why not add instead? Which this addition is what is happening with female participation in motorsports.

Instead of banning grid girls, why not add in grid boys as well?

Which has been a suggestion made elsewhere already. Then, because both the grid boys and grid girls would be part of motorsports’ image and marketing, viewers could judge for themselves what they’re interested in. Much the same as those running the business of motorsport could also then look at costs and attendance numbers, and profits, and decide what works. Audience and content are interrelated.

Plus what of those racers, drivers and riders engaged in advertising, product placement and sponsorship, part of this is also related to their perceived attractive images.

Even if having grid girls is in reality sexist, a relic of the past, which stereotypes women as objects for men to ogle, then introducing grid boys for women to then ogle counters any claims of sexism. Because neither sex would be discriminated against, nor would it be assuming a person’s sex determines their abilities and social function. Which is essentially the very definition of sexism. Be accurate with the language, rather blurring the meaning of the word “sexist” at will to suit an argument. Which only debases both the language and the argument. Much like apparently thinking correlation and causation are the same thing.

While we may appreciate our freedoms in part because of the boundaries, surely giving rather than taking away is the better step forward. Granted a case can be made for banning things in sport, such as alcohol and tobacco advertising. Neither of which are likely to improve driving or sporting ability much. If at all. And maybe so with the grid girls and potential grid boys. Yet why punish them. Isn’t taking away their jobs because they’re apparently attractive, or worse because of their gender, just another form of discrimination?

It may seem hypocritical for people to accept banning alcohol and tobacco advertising, but simultaneously oppose banning grid girls. It is all a bit of a grey area. Though people tend to reconcile this is several ways. One being it’s more acceptable to ban ‘sins’ of which alcohol and tobacco are typically considered as being; compared to being attractive, which typically isn’t. Another being that in the case of alcohol and tobacco, they are products, whereas the grid girls are people.

As for the answer, it’s up to those running motorsports to try things related to their intended target audience and see what happens. Much the same as it’s for fans of motorsports to judge and respond to these. Banning the grid girls probably isn’t going to add to the family environment for motorsport, or increase viewer numbers any. Whether it appeases a vocal minority or turns away an often silent majority remains to be seen.

In the meantime, what do you think about the WEC banning grid girls? Timeout on a relic of the past for the boys’ club, or, more misguided political correctness? Have your say and opinion can be gauged by answering the uthinki question below. It’s push button to start, you don’t even need to turn a key.