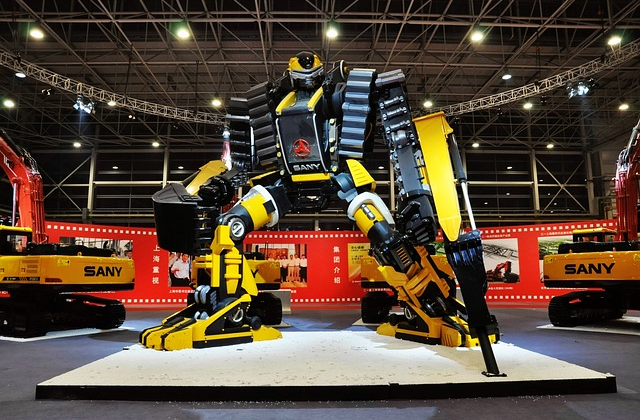 Separating technology and pop culture is often no mean feat these days, especially when it involves robots.

Times that by two if it involves giant robots fighting to the death.

Or the dysfunction, more correctly.

In this particular case, the American MegaBots has challenged the Japanese Suidobashi Heavy Industry, to a robotic duel of epic proportions.

This is not some backyard or hobbyist robot war with tiny machines, maybe packing a circular saw.

Instead, this is potentially a battle of giant, humanoid mechs fighting it out.

Science fiction, the future is here-style.

If the challenge is accepted, which surely it will be, because it would be dishonourable for the Japanese to do otherwise, then two robots each standing around 5 metres (15 foot) tall are set to duke it out in June 2016.

In the USA corner, is MegaBots’ MegaBot Mark II. Which has been described as America’s first fully functional giant internally piloted robot. Tipping the scales near 5400 kilograms (12,000 pounds), it’s equipped with guns capable of firing cannonball-sized paintballs at speeds of near 200 kilometres (120 miles) per hour. As a humanoid mech, MegaBot Mark II is bipedal. Yet despite its sort of two legs, it currently uses caterpillar treads to move about. A fully walking version is the design.

In the Japanese corner, is Suidobashi Heavy Industry’s Kuratas. Weighing in near 4,500 kilograms (9,000 pounds), the mech has two arms, and four wheeled legs capable of moving Kuratas at speeds of up to 10 kilometres (6 miles) per hour. It may either be internally piloted, or via remote control; and yes, they’re not cheap but versions of Kuratas are also for sale.

Whether this giant robot battle, if it happens, is going to lead to the likes War Machine (or Iron Patriot) and that not-quite-right movie version of the Silver Samurai fighting it out, is an answer probably still quite a few years away.

Beyond marvelling about the decades ahead, for the immediate future it might be more like MechWarrior than Voltron and Robotech, or even Gundam, but that’s still pretty damn exciting.

And so long as humans remain piloting these mechs and giant robots, no need to know or even worry about Asimov’s laws. Because nothing could go wrong.

Unless xenomorphs appear. In which case, surely Ripley has the keys to the Power Loader on hand.

No need to be afraid, because HAL can’t do that.

Finally robotics got cool. Make that robots got cooler.

Naturally no mention of the future and machines, likely made of heavy metal, would be complete without a Fear Factory reference, so consider that edge crushed and done.

Now if someone could organise Truckasaurus versus Mechagodzilla, that truly could be a fight greater than Mayweather versus Pacquiao. Robotic or otherwise. The former fight may even be more defensible and somehow less defensive than the latter.

Whether MegaBot Mark II versus Kuratas is going to usher in an entirely new sport of mechs and giant robots fighting one another for real in arenas around the world could well be on the cards.

Will the robot fighters not have any weaknesses, but instead have “character flaws” like other Metal Gear?

What you do think, are the machines finally beginning to rise?