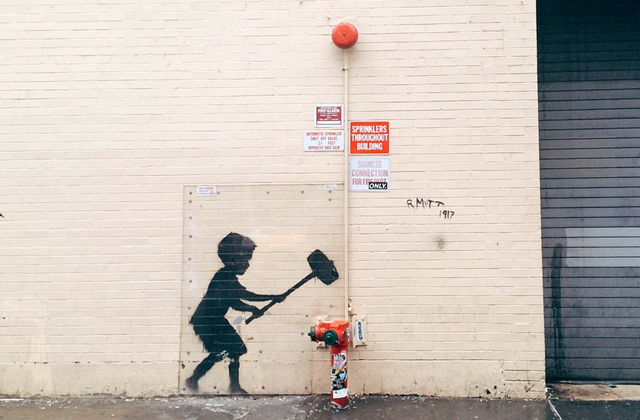 Celebrating 20 years of awarding and honouring the best of British art, the 2016 South Bank Sky Arts Awards were held Sunday, 5th June at the Savoy Hotel.

Winners included Eddie Izzard with the Outstanding Achievement Award, and Stormzy who took out the Breakthrough Award.

Amongst the nominees though, was another artist whom many were hoping to catch a glimpse of.

Known with certainty only as Banksy, the artist’s 2015 Dismaland Bemusement Park artwork was nominated for the Visual Art Award.

Lynette Yiadom-Boakye ultimately won the Visual Art Award for her Verses After Dusk, and congratulations are in order.

But that hasn’t stopped the wondering about Banksy’s true identity.

Banksy is known for having said:

“Art should comfort the disturbed and disturb the comfortable.”

Beyond Banksy’s extensive art works, which include street art and graffiti, often laced with social and political commentary on contemporary issues, little is known about the man outside of his pseudonym.

Elusive and secretive, the artist was believed to be attending the South Bank Sky Arts Awards.

Though Banksy’s art often features prominently around the streets of London, the mystery of Banksy the man himself and his true identity, however, continues.

Banksy was the subject of geographic profiling, where the artist’s “geoprofile” was constructed using statistical analysis, correlating potential hot spots for his geographical location, based on 140 works believed to have been created by Banksy around Bristol and London.

Despite delays due to Banksy’s legal team and their concerns largely over how the work would be promoted, the conclusion of the academic research was that Banksy’s real identity is Robin Gunningham.

A Bristol resident, Robin Gunningham is also a bit of a favourite for the identity of Banksy according to those using the internet at large.

Others are not so sure.

Noting that the geographic profiling may be based on a false premise because the 140 artworks used were only assumed to have been Banksy’s, with additional questions raised about the precision of the statistical methods, and the perennial favourite that correlation is not causation.

Banksy appearing and unmasking at the 2016 South Bank Sky Arts could have ended the Richard Gunningham debate, but where would the art be in that?