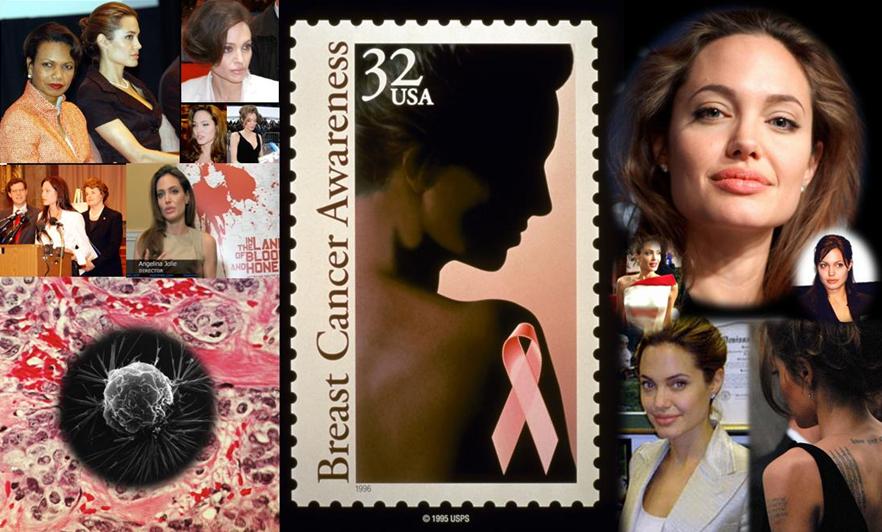 Since first stepping into the spotlight, Angelina Jolie was been many things to many people.

From Hollywood wild child, with her various oddities such as an interest in knives to wearing a vial of blood of her then husband Billy Bob Thornton (a much older man) in a necklace.  Perhaps channelling some of these quirks or even art imitating life, she became a celebrated actress.  Including winning three Golden Globes; and winning an Oscar in 1999 for her portrayal of the sociopathic Lisa Rowe in Girl, Interrupted.  Plus the Tomb Raider movies, although perhaps far from the most respected acting she has done, playing as Lara Croft served to place her truly in the public eye.

Seen as incredibly beautiful, she has consistently ranked in FHM’s list of the 100 Sexiest Women each year since 2000 to now; peaking at third place in the year 2005.  Similarly Esquire magazine listed her as the Sexiest Woman Alive in 2004.

Angelina’s bee-stung lips have inspired much imitation.  Over the years, there have been concerns over her weight and body image.  Of her cutting herself.  Comments about her tattoos.  Her right leg popping stance on the red carpet at the 2012 Academy Awards set in motion memes and trends on Twitter.

A Public and Private Life

It hasn’t been all about her looks and her acting though.  It has also been about her, both as a celebrity and as a person.  She has been the United Nations’ Goodwill Ambassador, working on humanitarian issues and raising awareness of refugees; which has also included her adoption of three children.  There were the estrangements and reconciliations with her actor father Jon Voight.  Plus her seeming a little too close to her brother at times.

Additionally depending on the person and their opinion, Angelina has been considered as ranging from a home-wrecking seductress to very lucky lady.  She was viewed as largely responsible for breaking up the marriage of Brad Pitt and Jennifer Aniston, in the wake of 2005 movie Mr. & Mrs. Smith.

In many ways, she has appeared an almost larger than life icon.  Being likened to others such as Elizabeth Taylor has not been unheard of.  Yet, Angelina has also been both more and less than a celebrity.  She is also a person.  Human.

Beautiful and flawed at the same time.  Something wild, that maybe cannot be truly tamed.  And this has been part of her allure.

A Family History of Cancer

It has been the recent, and very public acknowledgement that given her family history and fearing her genetically high risk of breast cancer, possessing the defective BRCA1 gene, that Angelina Jolie has undergone a double mastectomy.  Having both of her breasts surgically removed, at age 37.

An extreme measure, no doubt.

Yet there is the precautionary principle at work here; and that prevention is better than a cure.

Faced with the prospect of dying from breast cancer, and never getting to experience things such as seeing their children grow up, like other women before her Angelina made a difficult but potentially lifesaving medical choice.  Reporting that her doctors estimated that she “had an 87 percent risk of breast cancer and a 50 percent risk of ovarian cancer”.

Jolie’s mother, Marcheline Bertrand, had and fought breast cancer, and later succumbed to ovarian cancer, aged 56.  Angelina has also stated her intention to have her ovaries removed.

Angelina Jolie’s public admission of her condition and choices, have been seen nearly universally as both positive and awareness raising.  With what was, and is, a very private matter, Angelina has been praised for using her celebrity to help the public understand breast cancer.  In doing so, she has also again humanised herself.  Not just another distant celebrity, like us, she is also a person.

Christina Applegate went through a similar process back in 2008, also undergoing a double mastectomy.

Both women chose to speak out publicly about their private lives.

The “Angelina effect” as it is being called, is linked with the current heightened state of public awareness of breast cancer on account of Jolie’s story.  It remains to be seen whether this persists, as it will also being subject to the recency effect.  That people are often more aware of, and better remember, their recent experiences.  As stated, Christina Applegate went through a similar experience to Angelina Jolie, yet there is little current talk of a “Christina effect”.

That being said, however, the power of celebrity and the Angelina effect may help to aid in other medical and government run initiatives to diagnose, prevent, and treat breast cancer.  Such as the providing of free mammograms, for example: in Australia; in the USA also including information and data from the CDC.  Thanks to advances in genetic testing, the defective BRCA1 and BRCA2 genes can also be screened for.  There are also charitable associations and support networks, including the pink ribbon and the breast cancer site.

We tend to focus on those things that affect us personally and directly.  Has the news of Angelina Jolie’s choices made you more aware of breast cancer, have your say below.