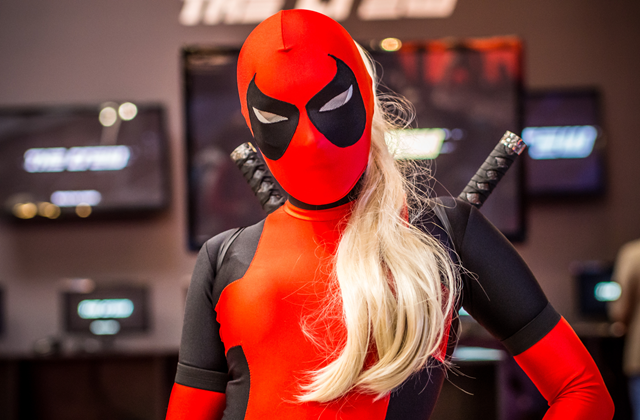 There you have it fans, Deadpool’s official suit for the forthcoming Deadpool (2016) movie:

Which is maybe better than the featured image for the article probably suggested. Sane though Lady Deadpool may be.

Speaking of, hopefully this time around the Merc with a Mouth actually has a mouth to use. After the debacle that was Deadpool towards the end of X-Men Origins: Wolverine, one can only hope. How exactly that movie ended up with some mouthless, uninspired Mortal Kombat-esque Baraka rip-off in place of Deadpool is more mysterious than the serious origins of this hirsute superhero (also kindly tweeted by Ryan Reynolds). Surely even Dogpool had to have been a barking lot better than pseudo-Barakapool? Even with Deadpool’s freakish healing abilities, it has taken many years for him to recover from that misstep!

Fans are a bit concerned about the potential tone of the movie. Including its rating. Whether it’ll be too toned down as a probable PG-13 rated romp (because mass market appeal and toy sales matter). An insane, mercenary anti-hero, and rather partial to a spot of ultra-violence, though Deadpool may be, his self-awareness of being a comic book character and that he’s being censored could all somehow just work in this movie’s favour.

Call it crazy, but there’s bound to be at least one fourth wall to break and maybe even a shark to deliberately jump. Wise cracking as he goes like a sarcastic hipster Santa. Minus the beard. And the cookie-fuelled gut. (People still reference Ryan Reynold’s abs in Blade Trinity, a movie made over a decade ago. With another reference now made here as well, maybe there’s another decade still to run. So sit up and take notice.) At least Deadpool and Santa have a red suit in common. Slaying could be subject to spelling and grammar corrections though. No reindeers were turned into rugs in this paragraph; the same cannot be said about bearskins.

As for the official suit, it does actually look a bit like an effeminate Spider-Man. Then there’s the quote: “With great power, comes great irresponsibility.” All probably intentional. Or so those sly folks at Fox would have you believe, Marvel Cinematic Universe (MCU) be damned. The Deadpool movie is on its way.

Let’s just hope that this time around, the villain isn’t a cloud-thing. Fox have done it before with Galactus in Fantastic Four: Rise of the Silver Surfer; and Ryan Reynold’s stint as Hal Jordan suffered a similar fate. No more green lights and still collecting dust that one. Reboots for all though. However, no mention should be made of M. Night Shyamalan’s The Happening ever again.

Now for the pointy end of the blade. Deadpool has probably read ahead and knows the question and the crowd’s answer already. But he’s not going to tell you. Because with that power comes great irresponsibility…