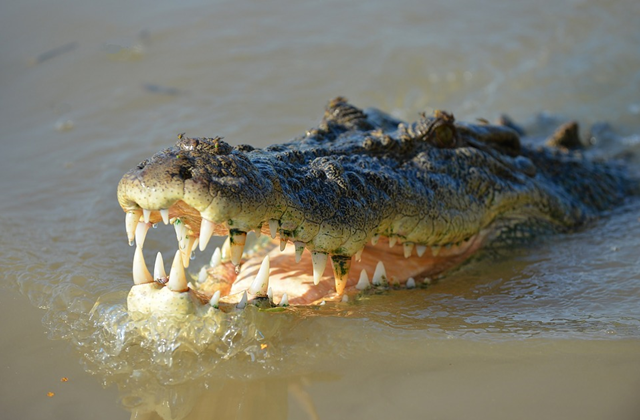 The crocodile believed to be responsible for taking the life of Cindy Waldron has been caught and killed, with its stomach containing human remains.

The 46-year-old Cindy Waldron was taken in a crocodile attack, while she was said to be wading up to her waist in the water at Thornton Beach around 10:30pm on Sunday 29 May, 2016.

Her friend, Leeanne Mitchell, 47, who witnessed the crocodile attack, suffered shock and grazes and was taken to Mossman Hospital.

The 4.3 metre crocodile was the considered by police as a target animal owing to its size and location.

It was trapped at Cooper Creek, in the Daintree, in far north Queensland.

The animal was subsequently euthanased.

A 2.5 metre crocodile was previously caught in a similar manner. Flushing the contents of its stomach revealed no human remains and the creature was said to be released unharmed back into the wild.

Following the crocodile attack, however, led to calls by some for the hunting and culling of crocodiles as a preventative measure.

While the Queensland Environment Minister Steven Miles ruled out a crocodile cull, the Queensland Government did announce an additional $5.8 million in funding for a three-year survey into crocodile populations, as part of its ongoing crocodile conservation plan and management program.

There’s the general consensus that people need to be responsible for their own safety under such circumstances.

As Professor Graham Webb, a crocodile expert and member of the International Union of the Conservation of Nature (IUCN), said in an interview with ABC News:

“It’s a management problem, wildlife management is about managing people.

“To go swimming at night, in a national park that everyone knows has crocodiles is something that you just don’t do.”

Despite the personal tragedy, Ms Waldron’s family seemed to accept the risks she took under the circumstances.

With her mother saying: “It’s not the crocodile’s fault, that’s his environment.”

“What she did there was a crazy thing, absolutely crazy. But that was her,” said Patrick Waldron, her father.

Which given the family’s views that the crocodile was not to blame, and furthermore that the first crocodile caught had the contents of its stomach flush and it was released back into the wild, why then was the apparently responsible crocodile itself killed?

Though being “euthanased” may sound more humane, the fact of the matter remains that the crocodile was killed.

Some may welcome such an outcome. Perhaps believing it will prevent other attacks and the further loss of human lives.

There could also be cultural, medical, or religious, reasons why an animal may be killed, such as in order to recover human remains.

Yet that seems inconsistent given reports of how the initial crocodile caught was handled, examined, and released.