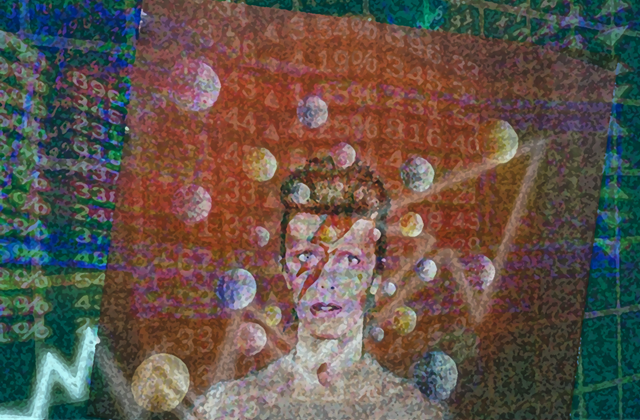 As the world mourns the death of David Bowie, born 8 January 1947 named David Robert Jones, and passing away 10 January 2016 due to cancer, many are remembering the man’s music and iconic nature.

It may be the hallmark of the truly great artists that they confound, challenge, and ultimately not only gain acceptance but shape society’s perceptions in process.

While the musician David Bowie is being praised for his innovation, it went far beyond music alone.

Bowie’s innovation also found its way into the world of finance.

Issued in 1997, the Bowie Bonds were debt securities whose cash flow payments were backed by the royalties generated from the back catalogue of 25 albums (with 287 songs) David Bowie had recorded between 1969 and 1990.

What was essentially the securitisation of intellectual property rights, managed to raise $55 million at the time.

Paying a 7.9 percent annual coupon, with a 10-year maturity, the Bowie Bonds were self-liquidating (with the principal owed declining each year).

Although at some points their ability to meet payments appeared almost as ethereal as stardust, the Bowie Bonds ultimately matured in 2007 as intended without default.

Upon maturity of the bonds, the rights and royalties of the songs reverted again to David Bowie.

The Bowie Bonds were a subset of what have since come to be referred to as Pullman Bonds; as investment banker David Pullman was instrumental in structuring the original Bowie Bonds deal, and many other securitisation deals since then.

Provided that there is at least the expectation of future cash flows, essentially anything can be considered an asset, and capable of being securitised. It may not always the best idea, as investors may not understand the complexity of the product or the nature of the underlying cash flows.

Yet much like David Bowie’s musical career, the world of finance is known to change and innovate with the times.