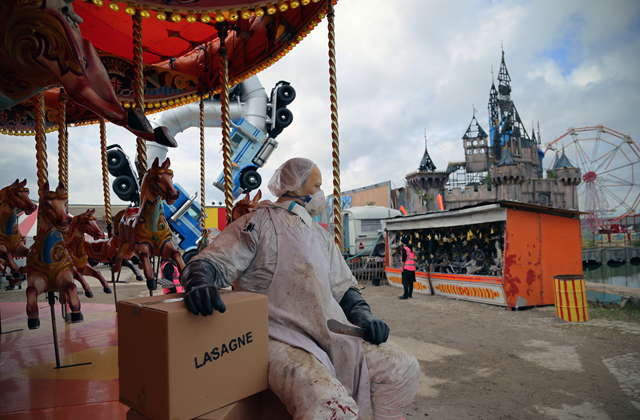 Dismaland the Unhappiest Place on Earth?

Dismaland, while perhaps not the unhappiest place on earth, is a Bemusement Park instead.

Dismaland is part of a dystopian and satirised vision of the world, done artistically. Or at least done by artists. It’s part of the dark and suitably pseudonymous work of the artist Banksy in collaboration with others.

Located on the seafront of Weston-super-Mare in Somerset, England, Banksy’s Dismaland runs this year from 22 August to 27 September.

The less than subtle nods to Disneyland, are likely an antidote for those who’ve choked on too many of the Panglossian viewpoints. Spoon-fed medicine that has been taken with too much sugar to make it all go down.

It’s about Dismaland’s attractions harmlessly indulging in some dark thoughts which have crossed the minds of more than a few at some point in time. Though such thoughts may have actually been closer to the original stories than their Disney animated counterparts. Hence the obvious satire and more careful irony.

Dismaland speaking against commercialism and consumerism could be a bit rich coming from someone with the pseudonym Banksy, but that could come as a bonus paid-in-kind.

Such are some of the bemusing thoughts evoked.

Not every one of those thoughts can be represented though. Dismaland is entry-level anarchism by its own admission. That does not stop what may be running through the minds of people however. It may also cause a few more things to run through, or from, them.

Maybe that Pinocchio should have taken the proselytising Jiminy Cricket, put a hook through him, and then used him as bait to catch a fish. A valuable lesson to all in keeping your mouth shut. And as a real boy, he’d also then have been taught how to fish. It’s like the grasshopper and the ants and the Christian ethos all rolled into the one artistic parable that only a theme park can deliver.

The macabre artwork in Dismaland may be for anyone who has ever wanted to pull the wings off Tinker Bell. Just to watch her squirm. Not because they wanted her pixie dust nor tried to fly. Although such goals aren’t mutually exclusive.

What flies in Dismaland may also be linked with what congregates above the waste and refuse. Wherein models of human immigrants fill boats cast aimlessly afloat, and a figure of Ariel ripples as though viewed through water. Whether a reflection of viewpoints or marking the contrast and distortion between Disney’s interpretation and the original Hans Christian Andersen tale of The Little Mermaid, is left undetermined. Since people do like to be beside the seaside, there’s maybe a riff on the dubious notion of the killer seagulls in Britain. Plenty has already been discovered, interpreted, and read into Disney films. Racism, sexism, and more has been claimed to have been seen in there by people, especially when it involves anything Disney and animated crows. Or that Walt Disney allied himself with those who were anti-Semitic, and perhaps he shared their views. There was also the dalliance of Disney and eugenics.

What all this may imply about the complexities of the Disney characters Goofy and Pluto both being dogs is open to debate. Maybe it’s a nod to George Orwell, or another oddity awaiting more of Banksy’s brand of dystopia.

Of course Dismaland is not everyone’s cup of tea. It’s unlikely it was ever intended to be. If the object of art and satire here is to be divisive and provoke thought, then Dismaland is succeeding.

That many of Dismaland’s attractions are taken from news headlines, or invoke imagery from popular films and video games, then getting people to go and physically walk through and experience the theatrics may not be all that bemusing by way of purpose.

Some may feel that it’s reflective of a darkening of social mood.

Others may view it akin to the freak shows of yore. Or a bit like the Kunstkamera, in Saint Petersburg, with Peter the Great using the freakish anatomical specimens to lure the public into the first museum in Russia.

Whichever it may be, if any, Dismaland will only be there until 27 September 2015. After that, who is to say?