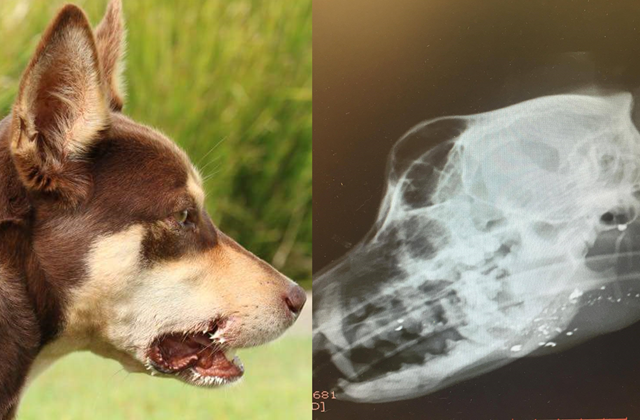 Dog Shot in Face and the Appeal to Help Her

The kelpie named Kasey has had a rough stint. What at first appeared to be an open wound from an infected tooth, turned out to be a gunshot upon vet examination.

The results of which showed the dog had been shot in the head.

Leaving behind shrapnel and a burst abscess.

Kasey was initially found by a council ranger, after she was dumped near Tamworth, in regional NSW, Australia.

Things have started to improve for Kasey the kelpie since then.

She was taken in as a rescue dog by Australian Working Dog Rescue (AWDRI). An Australian non-profit charitable institution which aims to save working dog breeds from being euthanased in council pounds and shelters, and find new homes for them.

As for the story of Kasey the shot kelpie, she weighed in at only 13kg upon rescue, and is now a more healthy 21kg.

However, while she had the initial surgery, further treatment was required to wire her broken jaw together and remove more of the shrapnel left by the gunshot.

With the costs totalling thousands of dollars, AWDRI is appealing for people to help with Kasey’s vet bills by donating online.

Carers at AWDRI are doing all they can to help her recover, and have recently seen Kasey start to wag her tail again.