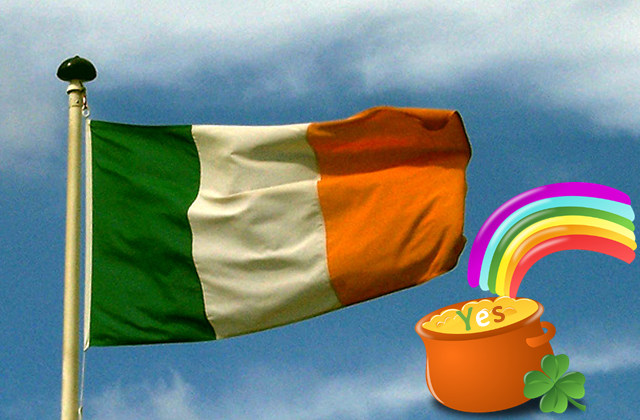 It didn’t even come done to the wire. The turnout of voters was large in number, and before long those campaigning against it had conceded defeat.

Irish voters were asked whether they agreed to the following statement:

Marriage may be contracted in accordance with law by two persons without distinction as to their sex.

“Yes” was the resounding answer.

All of which is moving the Republic of Ireland to legalise same-sex marriage. Making it the first country to do so by popular vote.

The country’s constitution will be amended to allow gay and lesbian couples to marry.

Voter turnout was near 60 percent, with more than 3.2 million Irish people asked to vote.

Announced at Dublin Castle, the official results were:

It’s a landmark occasion for the Emerald Isle, in which until 1993 homosexuality was illegal. Additionally in Ireland, abortion remains illegal, except where the mother’s life is endangered.

Linked with the above, the country remains predominantly Catholic, and same-sex marriages will be civil marriages and not religious marriages. With those at Catholic churches making the individual decision whether they’ll solemnise a marriage.

Archbishop of Armagh, Archbishop Eamon Martin, of the Catholic Church in Ireland is considering whether the church will perform the civil side of solemnisation.

Following the result of the referendum, the Archbishop of Dublin, Diarmuid Martin, said:

Yes Equality, those behind the same-sex marriage movement in Ireland, have stated:

“No religious institution can be forced to marry a lesbian or gay couple against their beliefs. Churches will be able to continue with religious ceremonies and will not be required to conduct wedding ceremonies for same-sex couples.”

The number of countries granting the freedom to marry for same-sex couples is growing, as is the trend towards marriage equality.

Where Ireland is paving the way is that it asked its people directly what they thought about same-sex marriages and to vote on the matter, rather than continuing with older laws by decree.

However, what may be the popular view in one country may be the minority view in another country.

So to what extent should willing and consenting marriage by adults be considered a basic human right?