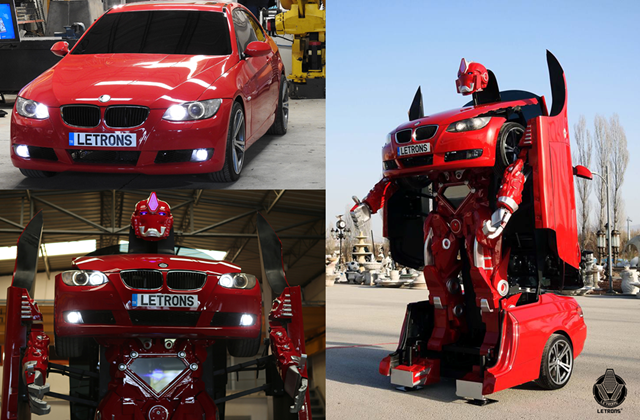 Letrons are BMW Cars which Transform into Real Robots

Robots are no longer in disguise and cars have more than meets the eye, thanks to a Turkish company called Letvision.

Somewhat like Unicron searching for a replacement eye, Letvision have channelled the AllSpark to create what are essentially real Transformers.

Functioning via remote control (since the sentience feature is probably being saved for the future) the BMW cars transform into a functioning robot.

Yes, the car is a full-sized, real BMW.

Which also makes for a full-sized, real robot once transformed, largely of the Autobot variety.

In car-form, the automobile features a functional steering wheel and front and back security sensors, plus an electric engine. While they can “ Letrons roll out” that the vehicles are technically remote controlled, currently does not allow them to legally be driven on the road in traffic.

This could change in the future as Letvision develops the Letrons further. Plus Uber is already trialling driverless cars in Pittsburgh, USA. So don’t expect the technology to stand still.

As for the robot-form, the Letrons are said to be capable of rotating their heads, with real-time speech and movement abilities utilising camera integration. Potentially giving them much deeper characterisation than anything seen in Transformers: Age of Extinction (2014). Further, the Letrons are capable of moving their arms, with actuated wrists and kinetic individual finger movements possible.

Unfortunately when transformed, the Letrons are unable to walk and can only stand still. Bipedal robots walking and autonomously navigating real world uneven terrain is particularly tricky. Yet research is being conducted elsewhere; and Letvision believes with sufficient funding for its own research and development it can add walking functionality into the Letrons in the future.

Now the Letrons are currently available in four models of the car robots (named BIZMUT; ARGON; W0LFRAM; and TANTAL), with more expected in the future.

They are also for sale, but Letvision will apparently only sell Letrons to buyers whose projects and reasons for use meet the company’s criteria. Exactly what the criteria are remains rather unclear.

Although maybe it has something to do with preventing the rise of an evil Mega-Letron which attempts to enslave humanity.

Whether the Letrons are eligible to fight in robot wars is also an unknown criterion.

In 2015, the proposed robot battle between the American MegaBots’ MegaBot Mk. II and the Japanese Suidobashi Heavy Industries’ KURATAS, saw the duel accepted. MegaBots then went through crowdfunding to upgrade its robot contender.

Yet for all the hype, it is well into 2016 and MegaBot Mk. II and KURATAS still have not battled it out.

Any real information about the robot duel eventuating has been eerily quiet, but some news from Megabots about the robot fight preparations is finally starting to emerge.

Perhaps now with news of the Letrons, things might shift up a gear. With the ability to transform adding a whole new dynamic.