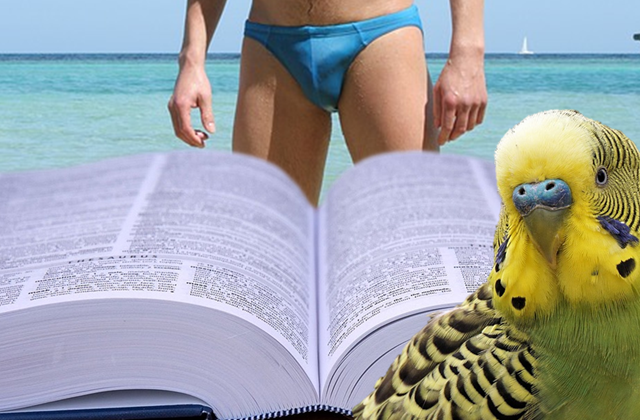 Then if that happens, it could become a proper word, so to speak, officially recognised by dictionaries.

At which point, those who originally used it will probably stop using it, even as the rest of the population hitches a ride on the bandwagon. Thumbing through it like the secret thesaurus of a cunning linguist.

This has now happened for the phrase-cum-word “budgie smugglers” which has been in use in Australia since roughly the 1990s, being officially recognised and included in the Oxford English Dictionary (OED) as a sub-entry in the new words list June 2016.

Whether it has something to do with any one or more of the following:

It’s a phrase that is about leaving little to the imagination by hiding packages in plain sight, as gentlemen wore tight-fitting swimming trunks or Speedos.

It was largely popularised by the notorious swimwear stylings of Tony Abbott, an Australian politician.

In a society increasingly crushed under the weight of its own political correctness, it’s soon to be deemed sexist and misogynistic because it tends to be a gender-specific term, and probably isn’t a suitable word to use at work lest it not include everyone.

There’s probably more, but the canary in the proverbial coalmine is clearly long dead amongst a list of other poor birds like the dodo. Or extinct elephant birds, which didn’t really bring their own trunks, swimming or otherwise.

Even pirates might now find they’re got a parrot and a chip on their collective shoulder, nevermind the codpiece. As for people smugglers, who knows whether this will stop the boats?

Expect other pop culture variants, like the less than magical “budgie mugglers” to start disgracing sentences around beaches and escaping like owls in theatres worldwide. It’s not about the money, it’s about the message.

And with the Rio 2016 Olympics, references to Brazilians and plucked chickens (or even pulled pork), and maybe other flightless birds, are bound to flock into swimwear commentary by the poolside.

Taking the temperature of the matter, there’s also the need to be on the lookout for Black Swans beyond the world of ballet, so if size really does matter: