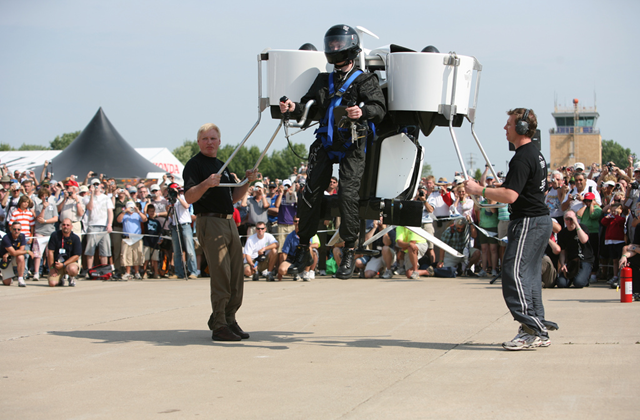 Jetpacks Will Soon Be A Reality?

To fly has long been a dream. And much like riding a motorcycle places the rider more alone with the road than does being the driver of a car, flying like a bird isn’t quite the same as flying in a plane or helicopter.

Or so Glenn Martin may have thought back in 1981, in Dunedin, New Zealand. When he first conceived the Martin Jetpack.

Rocket forward to 1998, with the beginning of the Martin Aircraft Company. Which listed on the Australian Stock Exchange, MJP, earlier this year.

Capital raising included a A$50 million investment from Kuang-Chi Science Limited; with the Chinese company involved in numerous technologies including aerospace.

The Martin Jetpack, which technically is not a true jet engine, but instead uses a two-litre petrol engine to drive two ducted fans either side of the pilot for lift, has been near 35 years in development.

Constructed of aluminium and carbon fibre, current testing of the Martin Jetpack suggests flights of over 30 minutes are possible. With speeds of up to 74 kilometres per hour, and altitude of up to 1,000 metres.

It’s able to carry up to 120 kilogram payloads, far in excess of the few kilograms drones such as quadcopters are currently able to carry.

Capable of vertical take-off and landing (VTOL), coupled with its compact size, it’s envisaged the Martin Jetpack will be initially used by first responders in emergency situations.

It will be able to be piloted by a human in the jetpack itself, or operated by remote control as an unmanned air vehicle (UAV).

How much does the Martin Jetpack cost and when will it be available?

The price tag is likely somewhere around A$150,000. First responders are expected to get their hands on the commercial version of the Martin Jetpack in the latter half of 2016. The personal version of the jetpack is scheduled for a 2017 release.

Perhaps that’s neither cheap enough or soon enough, but jetpacks are coming. As the rate of adoption and the technology improves, prices are likely to come down. And it’s not like jetpacks weren’t supposedly going to be a reality for many, many years now.

So the wait may not be that bad.

In the meantime, consider what applications an actual working jetpack could have. Beyond using jetpacks to fight villains and save planets, that is. Even if it’s 2017 or thereabouts before the richer folks start to get their hands on personal jetpacks, that’s still much sooner than Buck Rogers’ wait for his jetpack in the 25th century.