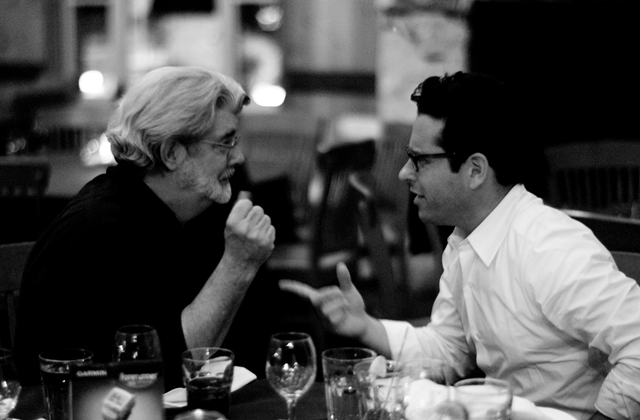 On a planet near, nearby…

With Star Wars: The Force Awakens breaking box office records, including cracking the $1 billion in box office receipts faster than any other movie, it’s more than likely Disney is pleased with its $4 billion acquisition of Lucasfilm.

Naturally through all this, eyes and ears have turned to the creator, or father, of Star Wars, George Lucas.

And from the man himself have come an interesting array of analogies and a veritable galaxy metaphors.

Talks of divorce and breakups, kids and marriage, fandom, and even white slavers.

Not all of them are intergalactic though.

Speaking to the Washington Post, Lucas said of parting ways with the Star Wars franchise:

“There is no such thing as working over someone’s shoulder,” he says. “You’re either the dictator or you’re not. And to do that would never work, so I said ‘I’m going to get divorced.’ … I knew that I couldn’t be involved. All I’d do is make them miserable. I’d make myself miserable. It would probably ruin a vision — J.J. has a vision, and it’s his vision.”

Lucas managed to extend to the family metaphor, and how Star Wars felt like a child to him with:

“I gotta go to the wedding. My ex will be there, my new wife will be there, but I’m going to have to take a very deep breath and be a good person and sit through it and just enjoy the moment, because it is what it is and it’s a conscious decision that I made.”

As reported in Vulture, George Lucas had the following to say about The Force Awakens:

“I think the fans are going to love it. It’s very much the kind of movie they’ve been looking for.”

Not exactly saying that he liked the movie personally, but perhaps closer to the parent at least feeling happy for the child.

However, Lucas and his comments perhaps strayed into disputed territory in his interview with Charlie Rose on CBS This Morning, when he said “I sold them to the white slavers” referring to the sale of Lucasfilm and the Star Wars franchise to Disney.

At the time of the interview, Lucas appeared to realise what was perhaps a quip, was in rather poor taste and left it hanging.

George Lucas has since apologised for his “white slavers” comment, calling it a “very inappropriate analogy”.

It’s debateable if Lucas had simply referred to Disney only as “slavers” instead of as “white slavers” whether his analogy would’ve garnered as much attention.

Regardless of the comment, some feel that George Lucas and his legacy are assured; that the Force will always be with him.

There is also the sense that maybe there’s more than a little bit of sour grapes on Lucas’ part following both the commercial and critical success of The Force Awakens.

As Lucas himself explained in Vanity Fair, on why he was done with directing Star Wars movies:

“You go to make a movie and all you do is get criticised. And it’s not much fun. You can’t experiment.”

Which has largely been true of the criticism heaped on all of George Lucas’ movies basically after the release of Indiana Jones and the Last Crusade (1989). Along with criticism of his revisionist approach to the original Star Wars trilogy, releasing updated editions which many felt were inferior, and pulling the original versions from sale.

If the first major Star Wars movie released in the post Lucas empire has done so well, and predominantly has not been heavily criticised, it’s understandable George Lucas feels somewhat slighted.

However, in part of the CBS interview with Charlie Rose following the now infamous “white slavers” remark, Lucas spoke of the difference between his vision and that of Disney’s for future Star Wars films:

“They wanted to do a retro movie. I don’t like that. Every movie, I worked very hard to make them different. I made them completely different – different planets, different spaceships to make it new.”

In defence of George Lucas, there is something rather undeniable about The Force Awakens (2015) feeling much like a heavy-handed homage to the original A New Hope (1977). But on a grander scale and in a good way. Or at least on a larger scale and with a bigger budget, especially when it comes newer movie’s Death Star nods.

Whether criticism leads to anger, and this has led George to hate, then suffering, and eventually leading to some form of Darth Lucas, remains to be seen. Yoda inspired logic or not, ultimately the relationships between father and child in the Star Wars movies may not be that removed from the more earthly relationship between George Lucas and franchise after all.

At least Lucas didn’t sell the Star Wars franchise to Hutt slavers, because they likely would’ve made it appear in a metal bikini. Disney said no to that slave element. Not that everyone, even the fans, agreed with it. Other fans felt pulling the sale of slave Leia merchandise was the right thing to do.

So in many ways, the soap opera, whether in space or on Earth continues.

Or just maybe, the circle is now complete.

Got an opinion on the whole Star Wars saga? Comment and answer the uthinki question below.