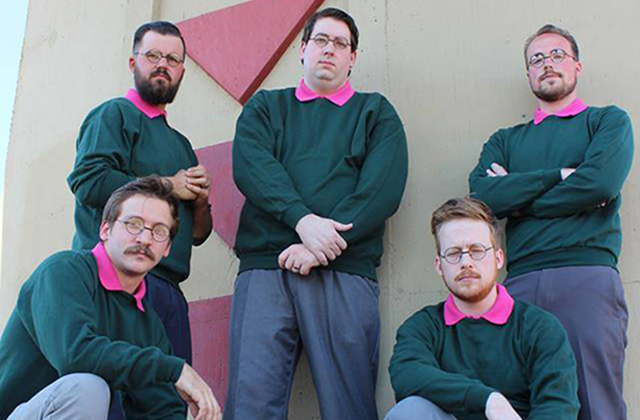 If Ned Flanders and heavy metal seems to go together like nuts and gum, then the good news is they’re together at last.

In these times of metal musical fusion (and confusion when it comes the Metallica and Lou Reed collaboration Lulu) with post-prog-djent-epic-core-metal-ness, one band is forging ahead with the new Nedal style.

Combining the goodness and likeness of Ned Flanders, with metal. Times five, it’s like a Flanders family reunion.

The Nedal band is called Okilly Dokilly, and is known to neighbourly wave from across the fence in its Phoenix, Arizona, USA home.

While they don’t do barbershop, they do still be sharp by keeping their moustaches (or cookie dusters) well-groomed. Along with wearing green sweaters, grey trousers, pink shirts and glasses.

If people are wondering isn’t that the bass player from Satanica in Okilly Dokilly, then the answer is no.

Speaking to Rip It Up, the leader of the Flanderers had the following to say about the musical style of Okilly Dokilly:

“Not as fast as Bartcore, and a little cleaner than Krusty Punk,” Head Ned says. “Not as heavy as ‘Homer J.ent’ – Nedal is a happy medium in the Simpscene.”

You can decide yourself whether Okilly Dokilly rocks as much as Otto by listening to their Okilly Demos.

No idea whether they now drive the school bus though; and feel free to blame the reed if the music is not as expected.

Can Okilly Dokilly help to overcome the Ned Flanders effect, as to why God just isn’t sexy?

Because the Devil may always be the one you least expect, and don’t worry, there’s no sugar in pixie sticks…

And yes, most of Okilly Dokilly’s songs are based on Ned Flanders quotes from The Simpson’s.

In which case, hi-dilly-ho, neighborinos it’s best to answer with your left hand and have your say in the uthinki question below: