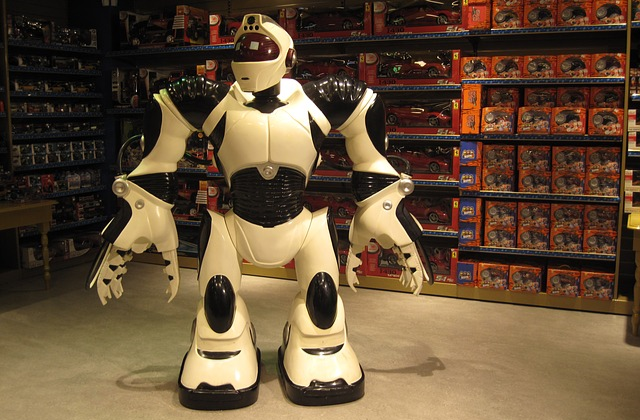 MegaBots Crowdfunding for a Fistful of Dollars

It began with the American creators of a giant fighting robot, called MegaBot Mk.II, challenging the Japanese creator of another giant robot, called KURATAS, to a duel.

Naturally if there are two giant robots, what else are they going to do but fight?

Steeped in the cultural history of giant robots, as a matter of honour Japan promptly accepted the robot duel.

Meaning the fight is on like Tron. So much hype, but it now needs to deliver.

However, there’s a twist to the saga unfolding.

MegaBots are calling upon the American people for help with this fight. Beyond patriotism alone, it’s the guerrilla warfare of donations that is crowdfunding. With MegaBots asking for an initial US$500,000, and up to US$1.5 million, via a crowdfunding campaign on Kickstarter for fighting upgrades for their robot.

Mainly because the Japanese Suidobashi Heavy Industries’ CEO Kogoro Kurata agreed to the robot duel not with paintball guns, but with fisticuffs.

Even if those fists are to be robotically massive.

It’s quite literally about which robot can rule with an iron first.

For sporting purposes of course. The rise of the machines is yet to happen. Though it could be getting closer, one donation at a time.

At a minimum, MegaBots needs US$500,000 to seriously overhaul the Mk.II, adding fists for melee combat, armour plating, and cranking up the top speed of the mech to five times its current speed.

Funding goals can stretch further from there:

With US$750,000 adding both projectile and hand-to-hand combat weaponry.

A neat US$1 million will help with balance control and allow MegaBots to work with IHMC Robotics for this purpose. A critical factor is that while both MegaBot Mk.II and KURATAS have legs in essence, their primary form of mobility is caterpillar tracks or wheels respectively. Kind of like an office chair, sure it has got legs, but wheels are what gives it mobility. Transitioning to a fully walking robot capable of traversing uneven terrain is a significantly more complicated matter. Even without the walking, a lack of stability in general could prove fatal for either robot. Tipping one over could end it all, if they’re unable to get back up. It’s the turtle factor. If one robot is on its back and can’t get up, then surely the other robot is going to have its way with it. (A bit like Bender, even if he did eventually find a solution.)

Heading into US$1.25 million crowdfunding territory will allow MegaBots to work with NASA to develop a safer cockpit for the robot’s pilot. However, given KURATAS can also be operated by remote control, it seems like the safer option would be to keep humans out of the robots entirely for the robot duel.

Capping off the full US$1.5 million, with the help of FonCo Creative Services will give the MegaBot Mk.II the full Hollywood-grade paintjob. Such an airbrushing should make it look real pretty. That Japan is the Land of the Rising Sun, and there’s the question of seeing by the dawn’s early light, may not be a coincidence. Meaning the glorious full Hollywood paintjob has surely got to be the star-spangled banner, Iron Patriot-style.

MegaBot Mk.II may be the all-American hero of the story, but those helping with the crowdfunding can’t simply be cannon fodder. Pledging to MegaBots’ crowdfunding campaign also has its perks for different donated amounts. For those willing to kick in pocket change of US$5,000 they’ll get to pilot the MegaBot Mk.II and use the mech to punch cars. Which presumably are some Autobots who can’t roll out.

Now as cool as all this may be – and it is two freaking giant robots set to duel – there are other more serious considerations.

First, should the Japanese Suidobashi Heavy Industries also be turning to crowdfunding for help upgrading KURATAS? Especially if it’s a question of national pride, and the Americans are already doing it.

Next, while making the near-future a reality of two giant robots duking it out, and fighting to the malfunction, is probably what’s important in the minds of most, there are other things to consider if giant fighting robots are truly going to become a legitimate sport and the next billion dollar sports league.

Metal skinned though they may be, fighting robots are essentially participants in (what is to be) a combat sport. To the robot death.

While Astro Boy (with machine guns in his butt) and Battle Angel Alita (Gunnm) may be able to hold their own against far larger robots, the reality of fighting robots here is in its infancy and not its anime ascendancy. Ten tons of hulking armour plated robot versus a two ton relative flyweight may not be all that sporting.

Like some sports, should there be a kind of salary cap placed on the fighting robots?

If MegaBots for the Mk.II manages to raise the full US$1.5 million worth of upgrades, does that put Suidobashi Heavy Industries and KURATAS at a distinct disadvantage because of budget constraints? Crowdfunding can of course help initially, but down the track the champion of the fighting robots may simply end up being decided by who has the most money. This isn’t exactly sporting. Imposing budget classes on the robots could be an approach.

It’s a duel, but should the robots’ weapons and materials used to build the robots also be subject to divisions?

This goes beyond simple melee versus ranged combat. It also goes into considerations about weapons such as guns, bombs, lasers, buzz saws, and robotic kung fu action death grip. While also related to any potential budget classes, the nature of the materials the robots are built of could be a factor. An alloy made of adamantium, mithril, and vibranium may not be happening anytime soon (even if scientists are working on the next best alloy), but titanium armour and weaponry could likely beat plain old iron.

Should there be different playing fields and variations on the sport of fighting robots?

As stability and mobility are key to the robots manoeuvring and fighting, the surface and nature of the combat arena could be far more important than for things like tennis and golf. Which people also call sports. Include giant robots smashing the crap out of one another, and it’s taken to a level far beyond grass and clay. Things like sand traps still could be interesting however. Different classes of robots fighting in varying terrains, including aquatic arenas could add to the sport.

None of these potential classes or divisions are to suggest robots can’t simply battle it out unrestricted as an anything goes fight.

Foremost the MegaBot Mk.II versus KURATAS fight in 2016 needs to happen first. It’s a question of national pride for both the USA and Japan. Team America versus Team Japan, who’s going to save the day?

Plus China did previously mistake Gundam as Japan’s latest military weapon. Both Megabot Mk.II and KURATAS are significantly more real.

Beyond such things, this is all uncharted territory. A robot duel on such a giant scale has never happened before. There will be things to learn from it. And with it will come the question of whether people want to see robots fighting a fair fight with imposed classes, or, anything goes battles. More to the point though, the learning experience means some restrictions may be imposed because of safety issues related to the robot pilots and spectators. As well as to stop the robot battles becoming overhyped disappointments because of things like one robot tipped over and another short circuited because it got wet.

Got an opinion on giant fighting robots, and who doesn’t, have your say about the duel in the comments and answer the uthinki question below: