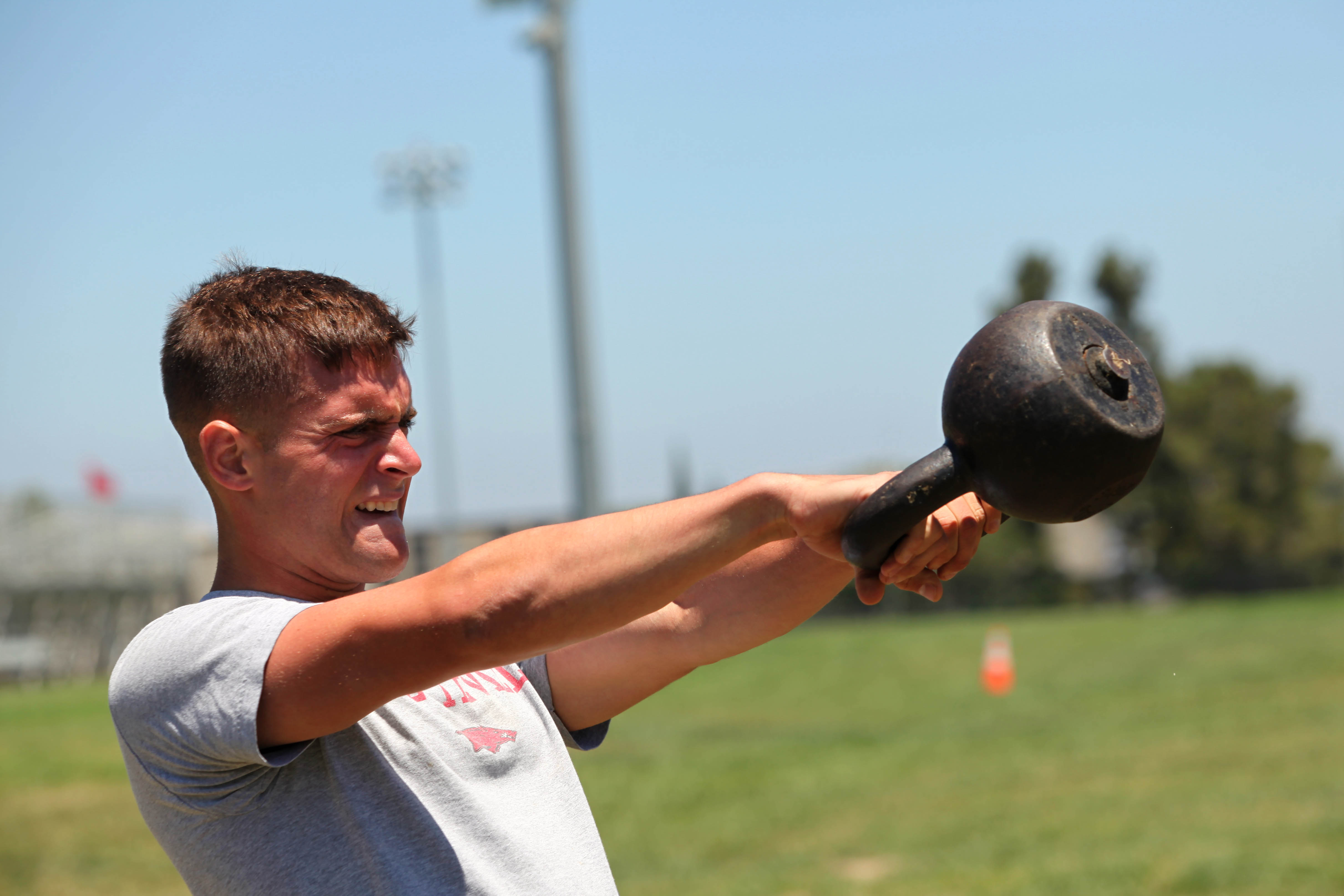 In late 2012, there were murmurs, rumours, and some general confusion about what was happening in the world of kettlebells.

The kettlebell (or girya in its native Russian tongue) is maybe best described as a cannonball with a handle.  Weird as that may seem, once people begin to understand them a bit better, kettlebells tend to be known more like the all-in-one gym.

The reason for this, is that their use favours not only brute strength grinding lifts, but also ballistic and dynamic movements.

The off-centre and displaced weight of the kettlebell can force additional activation of muscles for stabilisation (there is also the law of irradiation at work) making an apparently ‘light’ weight feel rather heavy, adding layers of difficulty and nuance.  Largely reflecting the notion that strength is a skill.  (It should also be noted that because of their shape, for some exercises kettlebells are easier to use than traditional weights such as dumbbells and barbells.  They can also be friendlier to the joints, allowing for a more natural flowing movement in some lifts than, say, using a barbell.)

Depending on what is your thing:  You could go running for a few hours to get your cardio in; or you could take advantage of the ballistic kettlebell exercises and their efficiency, and within 15 minutes leave yourself in a puddle on the ground.

To put it simply in terms of S&C, kettlebells can offer both strength and conditioning.  As a general statement, kettlebells are typically viewed as an efficient way to exercise and workout, and also to train and practise.  There is a difference between the two.

Largely responsible for driving this understanding were publisher John Du Cane’s Dragon Door, and the author and instructor Pavel “the Evil Russian” Tsatsouline.  Whom would later move to a single moniker, to be simply known as Pavel.  Thereby within the strength and fitness field, taking on a level of celebrity not unlike Prince or Madonna.  Yet with obvious differences!

However, late in the year 2012, Dragon Door and Pavel officially parted ways.  With the latter also taking with him many of the big names in the kettlebell and strength world such as Dan John, Dave “Iron Tamer” Whitley, Jon Engum, Geoff Neupert and others.  The exact reason for the split may only ever be truly known to a handful of insiders.  Yet it was enough to cause a lot of talk amongst the relatively tightly knit kettlebell community.

Be Strong First and Foremost?

StrongFirst has moved in exactly the direction that its name suggests, placing strength first and foremost as the foundation upon which other skills are built.  It contends that strength has a greater purpose.  Pavel is fond of citing Russian strength studies.  In this particular case, the choice is Professor Leonid Matveev: “Strength is the foundation for development of the rest of physical qualities.”

The notion of strength being the foundation is a view also shared by others, such as Mark Rippetoe for example (the author of Starting Strength). In fact, many of the viewpoints expressed in that particular article are consistent with Pavel’s.  Note that Pavel does also draw the distinction about the ‘measuring stick’ when it comes to assessing and comparing strength and conditioning.

Dragon Door, perhaps in response to this, has sought to move itself strategically away from strength alone, and into a broader more general fitness category.  As it claims, it is:  “The World’s premier site for Kettlebells, Strength, Conditioning, Flexibility, and Advanced Fitness Resources.”

In fact several articles such as the interviews with Andrew Read and AJ Roberts have sought that explain that it’s not all about strength.  The latter article in particular serves at times as a more cautionary tale of the negative impact on health if one purely pursues strength first and foremost, forsaking everything else in the process.

The RKC and SFG Certifications

However, there are some differences between the two.

The major difference is the use of single or double kettlebells:

The RKC still promotes the use of the big six kettlebell exercises: the swing, the get-up, the clean, the press, the squat, and the snatch.  All of these are done with a single kettlebell.

Beyond this, other differences include that the initial strength requirements have changed slightly:

Dragon Door’s RKC now has the hardstyle pushup (10 for men and three for women).

StrongFirst’s SFG has the chin-up or pull-up (five for men) or a 15 second flexed arm hang (for women).  (This was formerly also used by the RKC.)

Both certifications, with respect to the kettlebells used, include gradations based upon age and weight.

As part of the exit requirement, both contain the snatch test.  Which is 100 snatches in 5 minutes (50 snatches in 3 minutes if aged 65 years or more); kettlebell size varies based on weight and gender.  With respect to the snatch test, SFG still enforces the original requirement of using bare hands; RKC has softened somewhat and now allows a variety of gloves or hand wraps, provided they are not too thick.

SFG also includes a written test component, which is not present in the RKC.

StrongFirst is apparently taking a focused strategy; whereas Dragon Door is taking a diversified strategy.  This is understandable from both perspectives.

Pavel is free to focus on what he believes is most important: being strong first.

Dragon Door, as a publisher, is aiming to maintain and expand its line of products offered and sold.  To do this, whilst it has the back catalogue of Pavel’s works, it can no longer rely on or appeal to the authority of Pavel in quite the same way.  This will necessarily weaken over time.  Pavel was, and is, the kettlebell expert.  He was the reason many got into kettlebells (granted with thanks to the distribution by John Du Cane as the publisher), and is also the reason that many followed him to StrongFirst.  They did this so that they could keep learning from Pavel.

It is the notion that knowledge is purest at its source and dilutes as one moves away from it.

Countering this, Dragon Door has been expanding more into the bodyweight-only area of exercise following the releases of Convict Conditioning and Convict Conditioning 2.  In addition to offering Certified Kettlebell-Functional Movement Specialist (CK-FMS) Workshops with Gray Cook, the author of Movement; workshops with Indian clubs, and also the Primal Move system.  Recently, it has brought in Steven Low, author of the excellent book (some would call it a tome) Overcoming Gravity.

True of both its revised RKC and many other products, Dragoon Door is aiming more for the masses.

StrongFirst aims for the hardcore; not that it is elitist.  It will probably always remain somewhat iconoclastic.  It may be Sparta in a way the rest of the world simply is not.

When it comes to kettlebells, if you are looking to not be YouTube-trained and want professional teaching, depending on your requirements there will be several considerations.

If you are after a certified kettlebell instructor, it will likely come down to personal preference.  Including what the individual trainer is like, and their experience.  Both RKC and SFG will be similar, although the latter has placed more emphasis on doubles and the certification may have been slightly more rigorous and closer to the source.

If you are considering getting certified yourself, whether to go with RKC or SFG will depend on your goals.

If it’s a personal thing, and more about understanding kettlebells and getting stronger, then subject to locations and availability, SFG is probably the better choice here.

Dragon Door is increasingly appealing to the masses (beyond kettlebells), has the backlog of Pavel’s and others’ materials, and is also very savvy at marketing.  Accordingly, it likely presents a broader potential target market and a greater means for networking and promotion of an RKC-certified trainer’s business.  In conjunction with providing a means of selling the books, DVDs, and kettlebells.  Where a gap in the armour exists however, is that the appeal to the authority of Pavel and his knowledge, as justification, is now considerably weakened.  It will only grow weaker over time.  However, Dragon Door has the hometown advantage here with respect to the well-known and established RKC; and it’s expansion beyond kettlebells into bodyweight exercises such as with the Progressive Calisthenics Certification (PCC) promoting Paul “Coach” Wade and the brothers Al and Danny Kavadlo, is a blue ocean strategy.

Business-wise, Pavel’s approach really needs to be taking (perhaps reclaiming) part of the established kettlebell network.  In addition to expanding it as the Russian kettlebell invasion continues.  Whilst StrongFirst does also offer bodyweight and barbell certifications, there is something to consider with Pavel’s own words:  “When we say strength, we mean kettlebell.  When we say kettlebell, we mean strength.”  StrongFirst, and especially the SFG, still firmly rest upon the kettlebell as the fulcrum.  The kettlebell, is its weapon of choice.  StrongFirst needs to be the shark that bloodies the waters of the blue ocean strategy.  Accordingly, as an SFG-certified trainer’s business, there is the benefit of the far more direct link with Pavel.  Yet it currently lacks much of the additional networking and new products to promote and sell.  Again, it’s a question of focus over diversification.

A Slice of the Iron Pie

The split in the world of kettlebells may be somewhat factional like other sports (for example like boxing, cricket, rugby, and yes, even professional wrestling) have experienced at times.  Acknowledging that StrongFirst and Dragon Door are different may allow each to grow in a new, and perhaps better, direction.  This may expand the body of knowledge and skills for all.

What are your thoughts on this?  Is resistance futile, and you will be assimilated?  When it comes to learning how to use kettlebells, should you choose RKC or SFG?  Just don’t say CrossFit…