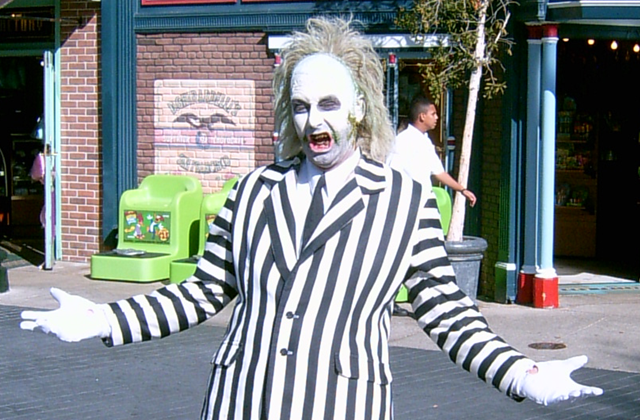 The movie Beetlejuice (1988), nearly three decades later still has an ongoing debate about the correct spelling of the title character’s name. (Because that’s what the internet does.)

Is it Beetlejuice, Betelgeuse, or-

Better stop before summoning the ghost with the most.

In the film, which is accepted as being called Beetlejuice, the spelling on Michael Keaton character’s tombstone is Betelgeuse, so perhaps the maker of the tombstone was the one who misspelled it? Although the character is a ghost, and this is probably overthinking it. It also doesn’t account for the spelling in the ad for the “freelance bio-exorcist” himself.

The explanation offered here, is that the difference of title between the movie’s name Beetlejuice and the character’s name Betelgeuse, was largely a studio-driven marketing decision (and artistic compromise, better than the studio-suggested House Ghosts and Burton’s tongue-in-cheek counter of Scared Sheetless, which was apparently seriously considered by the studio). With the former being more relatable and readily pronounced phonetically. Not unlike what the characters Barbara and Adam Maitland go through initially in the movie themselves.

All of this is plausible; and it does draw upon what is in the book Burton on Burton.

Whether with a name such as Betelgeuse, many viewers would’ve expected an astronomy movie is unclear.

However, there are the film’s opening titles, which list “Michael Keaton as Beetle Juice”. Which throws a shrunken head into the works. It’s also not a stretch of the imagination here to see the title clearly as Beetle Juice as well. Putting the accepted title of Beetlejuice itself back into question.

Without all the firsthand details from people such as director Tim Burton and writers Michael McDowell and Warren Skaaren, it’s likely to remain all a bit of a conjecture. At least until someone simply steps up and takes the blame for a typo or two, possibly the continuity editor. Or the three different spellings are all a rather serendipitous in-joke.

So which is it?

You didn’t read them all out aloud did you…

Maybe it’s not any of those three spellings, but something else. (No, it’s not Lester Green.) Whether that something else resides in the question below may only be seen by the strange and unusual. Or at least those who press the button to answer the uthinki question.

Maybe it’s that something else, which will be the name of the long suggested (and potentially unwanted) sequel Beetlejuice 2. Which could lead to another debate entirely for those whose sense of humour isn’t recently deceased.

Irrespective, suggestions are that the original striped suit simply works a lot better than any Hawaiian shirt ever could. Even if bananas are a tropical fruit.