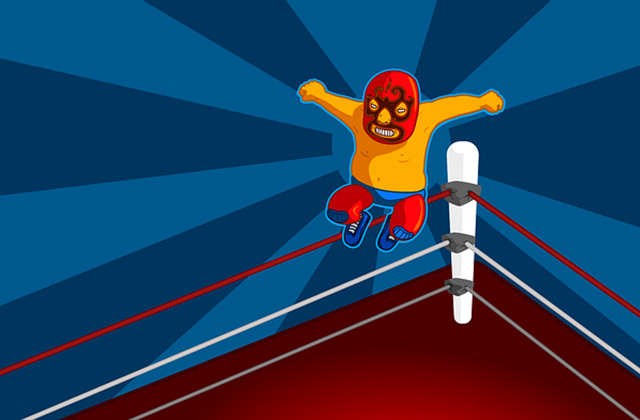 Mexican professional wrestler Pedro Aguayo Ramirez, died in the early hours of Saturday morning on 21 March 2015. He passed away in hospital, after a wrestling match in Tijuana. Where on the ropes and limp, a strike to his neck may have ultimately been fatal.

Wrestling under the name of Hijo del Perro Aguayo, the wrestling match continued until the referee and other wrestlers realised Aguayo’s situation was dire and went to help him.

Many onlookers and fans initially thought it was all part of the show.

Aguayo was wrestling against Rey Mysterio Jr., whose real name is Oscar Gutierrez.

Not For Entertaiment Only

Beyond any debate about fakery, there is undeniable physicality required. With this, is an attendant level of risk. Whether professional wrestlers are called athletes, entertainers, or even warriors, their sport is combative, if choreographed, in nature.

While the larger than life lucha libre characters are often almost caricaturised or cartoonish in nature, as the death of Pedro Aguayo Ramirez has sadly highlighted, the consequences can be all too real. And he’s not the first professional wrestler to die in the ring.

For example, Owen Hart died in 1999 from a fall attributed to faulty stunt equipment during a WWF match. Although this was not shown on the pay-per-view, the show did continue. Fans in the arena where unaware of Hart’s death, and the WWF were heavily criticised for their apparent “the shown must go on” attitude.

Different in nature, but deaths have also occurred in Japanese sumo wrestling. With holds and moves proving fatal if the competitor was of sufficient strength regardless of intention. The rules of the sport have been modified accordingly.

Shoot wrestling, with its Japanese origins in the 1970s, was, and is, far more about grappling and combat than its flashier Western professional wrestling cousins. Arguably being a precursor of today’s more popular mixed martial arts (MMA) competitions. Which also have their levels of risk.

Various choke holds have been banned due to their dangerous nature. But bones and other parts of the body do get broken. Whether in cages, octagons, or rings.

Sometimes risks are present even for those interviewing the MMA competitors. As Ronda Rousey demonstrated when she purportedly broke the ribs of a reporter during a demonstration throw.

Doctors and medical associations, such as the Australian Medical Association (AMA) have called for bans on boxing. Beyond the deaths which occur – an example as recent as March 2015 – owing to the so-called “barbaric” nature of the sport. Wherein in addition to repeated punches to the head, a knockout is unconsciousness typically resulting from trauma suffered to the brainstem. The repeated long-term impacts of which have been linked with brain damage including Dementia pugilistica (DP) and said, although still debated, links to Parkinson’s disease.

Back to the question of manslaughter involving the death of Pedro Aguayo Ramirez. Which is very different to the case of Owen Hart which had elements of faulty equipment and negligence at play.

Manslaughter is typically defined as either voluntary or involuntary, subject to the legal jurisdiction. Less than murder, but still occasioning death. Taking into account the state of mind and potentially mitigating circumstances.

Yet is it fair to consider such a charge of manslaughter for what happens within a combat sport match, even something as scripted as professional wrestling?

If the number of wrestling matches which occur annually without the death of a participant are accounted for, then the frequency of death is quite low.

However, if, a death were to occur, then the impact of that death can be utterly catastrophic.

Even though professional wrestling including lucha libre may be more about entertainment, dire accidents do happen.

Just ask Jackie Chan about the number of injuries he has sustained all in the name of entertainment. Whether he really has “broken every bone” in his body may not be entirely true, but it probably isn’t far off; and this has occurred filming movies with choreographed fight scenes and planned stunts.

So even acknowledging lack of intention and the accidental nature of the deaths, how does one judge the potential risk of death in combat sports? What assumptions are made regarding frequency and impact?  And are combat sport participants and entertainers cognisant of this, accepting the risks such as they may be?