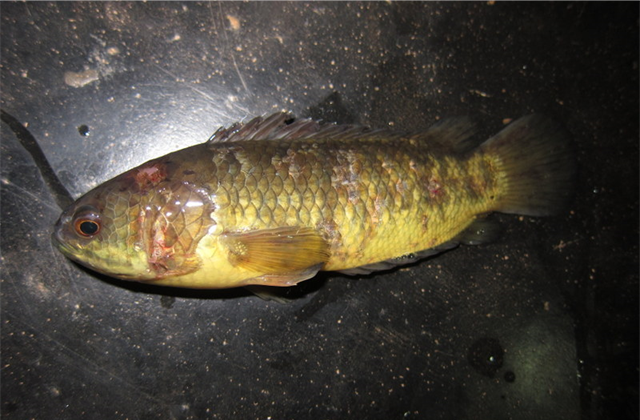 March of the Climbing Perch to Australia?

Scientists and the Queensland Department of Agriculture and Fisheries are currently concerned that the climbing perch could soon be making its way onto the Australian mainland.

The climbing perch, Anabas testudineus, is a freshwater fish native to Southeast Asia.

Yet over roughly the past four decades, it has spread through to Indonesia and into Papua New Guinea.

It has already been found in two islands in Australian territory of the Torres Strait. The first observations of this, occurred a decade ago back in 2005.

Dr Nathan Waltham, a scientist from James Cook University, is concerned that if the climbing perch is not managed in the Torres Strait, it’s likely the noxious fish could continue its journey southwards to Australia.

“We’ve only found them on Boigu and Saibai islands, so these are the islands that are closest to Papua New Guinea,” Dr Waltham said.

What is remarkable about the climbing perch, is its ability to survive.

It’s a freshwater fish, but can survive in salty water.

As a labyrinth fish, it has the capacity breathe air provided its labyrinth organ is kept moist. Allowing it to survive for prolonged periods, potentially up to weeks, on land. It may also bury into the mud to hibernate, reportedly being able to survive up to six months in this manner.

It’s an aggressive and opportunistic predator. Plus its defence mechanisms include flaring its gill covers. Which typically results in the fatal choking of other fish and birds that try to eat the climbing perch, getting them stuck in their throats.

In addition to all that, the climbing perch can ‘walk’ across the land and even climb trees.

In short, ecologists are concerned that if the climbing perch makes it to Australia, the native mainland species are ill-equipped to survive the noxious fish.

“I still think the chances of it getting to Australia by swimming are quite low,” Dr Waltham said.

Dr Damien Burrows, also of James Cook University, and the director of TropWATER, believes the climbing perch could survive the trip across Torres Strait on a fishing boat.

The climbing perch are used as live-bait fish as well as being eaten by humans.

“Anecdotes are that they are carried between villages on various islands,” Burrows said. “So a trip in a boat across the Torres Strait is not out of the question.”

Education campaigns are currently underway to help those fishing in the Torres Strait to identify the climbing perch in a bid to stop it reaching the Australian mainland.

“There is no viable means of eradicating the fish from these islands and an awareness campaign was conducted with island communities to help prevent any further dispersal of these exotic fish.”

Although the climbing perch is not a native species of Australia, and the biosecurity of imported species can be a risk to the ecology, in the grander scheme of things is this a case of witnessing evolutionary forces in action?

Researchers at James Cook University are currently studying the resilience of the climbing perch, with respect to its tolerance of oxygen, salt, and temperature levels. It’s hoped these variables could be used to control the fish species in the wild, and stop the march of the climbing perch to Australia.

While hopefully not on a par with the monumental consequences and misunderstanding that was introducing the cane toad into Australia, if the climbing perch reached Australia via crossing the Torres Strait on a piece of driftwood would this be viewed differently to it arriving on a fishing boat?