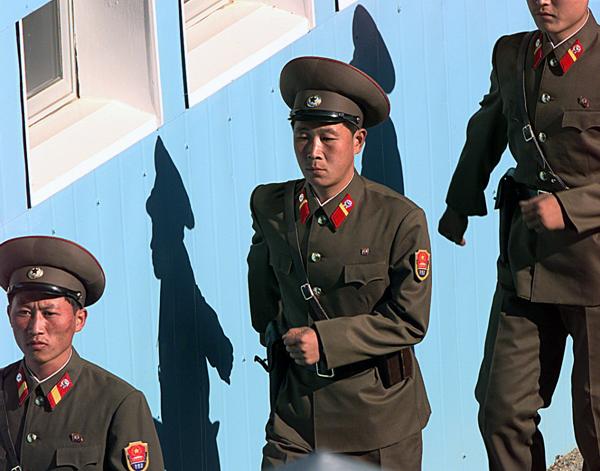 An Ongoing State of War

North Korea has declared that it has entered a state of war, and will use wartime protocols to deal with its counterpart South Korea.

As a country, North Korea has been largely shut off from, and closed to, the rest of the world.  Where things often taken for granted elsewhere, such as mobile phones and even magazines are not allowed to cross the borders.  This speaks to the level of control the government – or, dare it be called a regime – exerts upon its citizens.  Methods such as this are used as a means of media control.  To stifle the ease, and freedom of speech; and promote the party line (and propaganda) of the ruling body politic.  If one thinks about how hard it is to monitor and censor statements made, especially in real time, on mobile phones, the link between their availability and the level of a society’s openness becomes clearer.

Clarity is not something North Korea is known for.  Secrecy is.  Although this has changed dramatically in the past few days with open wartime rhetoric issued from Pyongyang.

Technically, North and South Korea have been in a state of war since the Korean War ended near 60 years ago with an armistice, not a peace treaty.  It has been an example of another form of Cold War.

Given North Korea’s apparent nuclear weapon capabilities, including the recent test in February 2013, and the country’s long-range rocket launches, there is cause for concern.

The Cold War notions of mutually assured destruction (MAD) if either Russia or the USA initiated a nuclear strike, was a strategy to prevent escalation.  Holding things ill at ease; yet this was a better impasse than the alternative.

With North Korea’s ability to use ballistic missiles capable of striking Japan, tensions have grown in the wake of Pyongyang’s tests.  Similarly, the United States is now planning to establish a 50 percent increase in ballistic missile interceptors along the West Coast of America.  This is linked with statements purporting that the North Korean leader, Kim Jong-un, has ordered his country’s missile units to prepare to strike US military bases and homeland.

Following the missile and nuclear testing, sanctions by the UN have been imposed on North Korea.  However, such measures tend to hurt the masses more than the ruling elite of a country.

Threats out of North Korea, are not especially new.  With the threats levelled at Seoul, given South Korea’s alliance with the USA, and the joint military exercises the countries conduct.

China and Russia have both called for calm in the situation, urging North Korea back towards a diplomatic solution.

The US, confirmed on Thursday, that it had used nuclear capable B-2 stealth bombers to drop munitions on a target range in South Korea.  Perhaps favouring a show of its military might, and bringing the knife to the table rather than discussion.

However, one threat is usually followed by another, and the fear is the escalation of these into actual violence and nuclear warfare.  The US may be attempting a grim trigger approach, and aiming to display to North Korea that assured destruction will not be mutual.

The problems with such declarations, even if empty threats, are the impact and repercussions of nuclear warfare should it occur.  Furthermore, if taking such an approach, the threats cannot be empty if they are to have any credibility.  North Korea is well known for its sabre rattling, tending to follow a pattern.  Of course, this assumes the pattern is predictive and will continue.

The Art of War?

Curiously, much of the greater region in Asia has gone through some interesting times.  Nothing quite on the scale of North Korea’s statements of following “wartime protocol”.  However, there may be some cracks on the surface.  China and Japan continue to rattle their sabres over the Senkaku, or Diaoyu, Islands.  There has been unrest and violence in the Philippines.  Along with reported attacks and attempts by Chinese hackers on the institutions of other nations.  There is the sense that such apparent calmness, and perhaps volatility suppression, may belie a powder keg of a situation.  North Korea hopefully will not be the spark to the tinderbox.  Or, it may perhaps serve to focus efforts and attention towards it, and away from the other matters.

In addition to the politics, economics may also have a role to play, including notions of currency warfare.  Statements made along the lines of, that starting a war is good for the economy (and the share market), are seriously flawed.  Both logically and empirically.  This is without taking into account the costs and losses from a humanitarian perspective.  However, that does not mean that glorious and supreme leaders understand this.

What are your thoughts on the North Korea’s declarations?  Boys and their toys playing with people’s lives, threats to world peace, or something else?