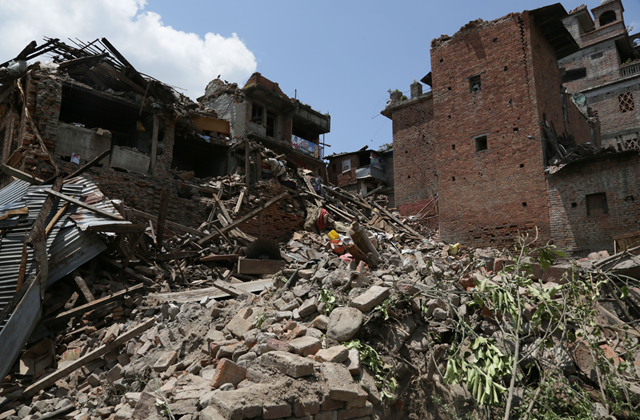 Rebuilding After the Nepal Earthquakes

On Tuesday 12 May, Nepal was rocked by a second devastating earthquake.

The first earthquake measuring magnitude-7.8, struck 25 April 2015. With its epicentre Barpak in the Gorhka district, it resulted in the destruction of entire villages. Tragically claiming more than 8,000 human lives, injuring some 19,000 people, and displacing many more numbering into the estimated millions.

Three weeks later, amidst the aftershocks as strong as magnitude-6.3, another earthquake measuring magnitude-7.3 has again struck Nepal. Its epicentre occurred near 18 kilometres beneath the earth, and to the east of the capital Kathmandu, in the district of Dolakha.

Krishna Siwakoti, a farmer living near the epicentre told CNN:

“The land has cracked open in many places, many people don’t even have a spot to put their tents. The situation is dire. We are isolated.”

To some extent, that isolation has in part formed a blessing in disguise, with the combined death toll from both quakes now totalling over 8,200 lives lost. The second earthquake has not had the same level of devastation as the first, yet this is little comfort to those already impacted by the quakes. With aid and volunteers already stretched thin from the first.

This is amidst concerns that the onset of the monsoon season around June, could see further landslides and flooding occurring. The potential human toll is unknown and recovery efforts are likely to be challenged by the conditions.

Amongst this, those living in Nepal are aware of the dangers of earthquakes and accept this as part of their lives.

The Himalayas themselves, along with the Tibetan Plateau, are the result of plate tectonics. With the Indian Plate sliding north-east towards and beneath the Eurasian Plate at a rate of about 20 millimetres per year.

Even understanding this, at present there is little that can be done to predict earthquakes. At best scientists can detect the build-up of seismic pressure in the earth as the tectonic plates shift, but can not predict when or necessarily how that pressure will be released.

An analogy would be to consider a spring being compressed between two solid, but uneven surfaces. The greater the compression of the spring, the more potential energy it has to release. However, being on the uneven surfaces, the spring may burst out from any which direction at an unknown time.

What little can be said, is about a distribution of the relative frequency of earthquakes given their magnitude. This can not predict earthquakes, but can in general describe, based upon past data, how earthquakes may be expected to occur in the future in aggregate.

Which in general, the distribution suggests that there should be a larger number of smaller earthquakes and fewer earthquakes of increasingly larger magnitudes.

However, the energy of the built up seismic pressure could be released as a higher number of small and relatively harmless quakes, or, as one massively devastating earthquake.

This also makes suggestions of an area being “overdue” for an earthquake – such as Kathmandu last being struck by an earthquake near 81 years ago – subject to considerable error and can only hold true in the most general long-run sense of the distribution.

(Not exactly the same, but it’s a bit like it is incorrect to suggest that after getting five tails in a row on five flips of a coin, that a heads is now overdue and more likely on the next flip.)

Knowing that pressure is building and where this is occurring, does give insight, and with this knowledge, it could perhaps be put to use in the rebuilding efforts to follow in Nepal.

Beyond the immediacy of clean drinkable water, food, and shelter, plus medical supplies and services, perhaps some of the aid and charity monies should be directed towards better building practices. Which could include the volunteering of builders and structural engineers, if able, to help plan and oversee the rebuilding and construction efforts ahead in Nepal.

For humans, a critical factor of the impact of an earthquake will be related to the number of people in an area; and this number tends to be positively correlated with more densely populated urban environments which typically have multistorey buildings.

Linked with this, is that existing and traditional structures in developing nations may not have benefitted from more modern building codes and practices currently in place for construction to better deal with earthquakes and seismic activity.

Though the lives lost can only be remembered, and it cannot be changed that earthquakes are a fact of life, especially in Nepal, perhaps in the rebuilding some good can from the disaster.

With the rebuilding that could be done, helping to minimise and prevent further disasters in the future.

Tragedies have the capacity to bring out the best in people as they face the worst. And stories told by the human faces of the helped and helping hands are nothing short of remarkable.

With this, knowing we cannot predict or prevent earthquakes, perhaps some of the help and charity offered to those in Nepal will extend beyond the much needed humanitarian efforts, towards longer-term goals of planning and rebuilding structures better able to withstand earthquakes.