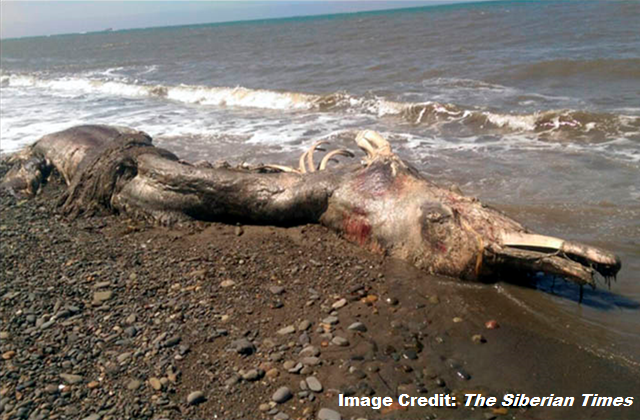 Locals found the carcass of the unidentified sea creature, describing it as having a “long beak” and a “furry tail” making it unlike anything they’ve seen before.

It’s also continuing to baffle marine experts from around the world.

The mysterious creature has been described as about twice the size of a human being.

Speaking to The Siberian Times, Nikolay Kim, the Deputy Head of the Forecasting Department of the Sakhalin Research Institute of Fisheries and Oceanography, stated:

“Judging by the appearance of the head, this is clearly some big dolphin. According to a characteristic of the skin, it is a rare species.

“I doubt that it lived in our waters. Most likely, the animal was brought by the warm current. Here often appear tropical and subtropical species. On cooling, they stay here and then die.

“I can confidently say that this is some kind of a dolphin. However, it has fur. It’s unusual. Dolphins do not have any fur.”

Which may put to rest the question about whether anyone has ever seen a hairy dolphin.

Of those on social media, one suggested that dolphins needed to grow fur because it’s so cold in Russia.

Notions of mutants, bearded hipster dolphins, and even Chernobyl may have got a few mentions. As for what the mystery creature truly is, by the looks of the images, it’s most likely a rare beaked whale found in the North Pacific.

Of the beaked whales, it is most probably Baird’s Beaked Whale, although given its size, the creature was not fully grown.

A similar such creature was found in 1925 on a beach in Santa Cruz, California, USA. It too was described as having a duck-like beak. Along with a huge head, and an apparent neck some 10 metres long. Although dubbed “Moore’s Beach Monster” it was subsequently identified as a Baird’s Beaked Whale.

Another example of a dead beaked whale washing ashore occurred near Newcastle, Australia in 2014. Though it had a decided lack of anything resembling hair or fur.

Regardless of the exact species, and maybe it is an undiscovered one, beaked whales are extremely and exceedingly rare. So rare are beaked whales, that they could almost be considered the unicorns of the sea, if narwhals didn’t have that moniker already covered.

Yet there is definitely an element of mystery to this Russian sea creature.

A bit like manatees supposedly attacking humans, claims of sea monsters and other mysterious creatures will continue to be debated by cryptozoologists, zoologists, and other people alike.

Have your say on the mysterious, and possibly hairy, Russian sea creature in the uthinki question below: