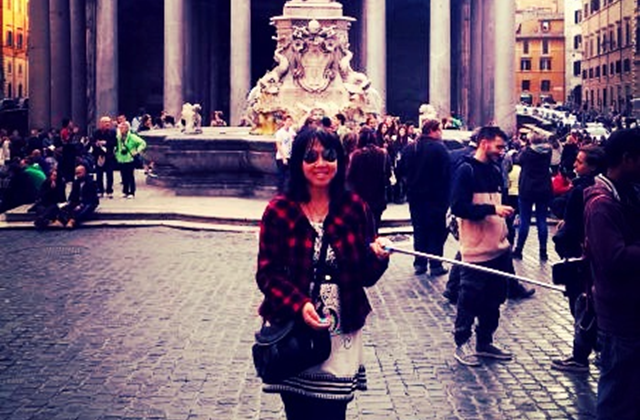 Reaching for the Selfie Stick

The selfie, whether it’s the about face and smile or the full mirrored stand and pose, the photo of the self with a phone has become beyond common place. With selfies now the fodder of the digital world in a way that the real world can only be thankful so few of the photos are actually printed.

Although a Kim Kardashian-obsessed Kim Kardashian West is releasing a book of her selfies, called Selfish, for the similarly selfie self-obsessed fan. Notwithstanding any ogle factor, why exactly converting digital selfie images into a physical book made any sense is a bit of mystery. Perhaps it was just easier to make a profit that way. Though the coffee table book seems rather removed from the mobile and transmitted talking (or commenting) piece that selfies usually are.

As for commenting on selfies, the language is becoming more focused if blurred in its meaning.

Names, typically portmanteaux (sticking parts of two or more words together), even now aim to subcategorise selfies. Some amongst the many attempts are:

Helfie, a gym or exercising related selfie aimed at showing off the health of the subject in the selfie. Preferably via exposing their abs. (If you need any posing techniques, this video has got you covered.)

Welfie, a display of wealth or bling in selfie form.

Then, there’s also the vaingloriouselfie…

Plus there’s the never-ending quest for the next big thing in selfies.

The donut selfie has been attempted. Don’t call it a halo selfie though, because there’s nothing holy (or Spartan) about such a level of idolatry. And whilst the world eagerly awaits the selfie drone which flies around taking photos of you from every angle, privacy is reaching in a different direction.

For the moment, those self-photographing people wanting to accessorise further, need to content themselves with the selfie stick. A “stick” (more likely a metal pole, which may be extendable) to attach the phone to on one end, and with an accompanying Bluetooth or Near Field Communication (NFC) linked button used to press to take the selfie.

Thereby making possible both greater reach and elevation with the selfie stick. Yet probably not offering much by way of perspective. Or it’s a tripod, but in unipod form.

The extendable aerial in a phone, is these days a thing of the past and largely unnecessary. (Unless Apple makes one out of gold.) But maybe not so fast. What if, in perhaps rather (or post) ironic retrofitting of sorts, in place of the former extendable aerial there was instead a built-in extendable selfie stick? Simply extend it out of the phone for instant elevated selfie action. It could be more useful than a stylus.

Not to mention it may even be more convenient than carrying around something as fundamentally inconvenient as a selfie stick. But maybe not as robust or big as one. Thereby eluding the desire to photograph softly and carry a big stick.

Like a bad tattoo, it seems the selfie is here to stay. Can the same be said of the selfie stick? Will it be looked back upon as something which defined the look of generation, like moustaches, bellbottom trousers, or the mullet (and is probably something to be equally mocked in the near future)? Or is it more of a passing fad, the latest killer app, of sorts like the Koosh ball or Furby but more photogenic?