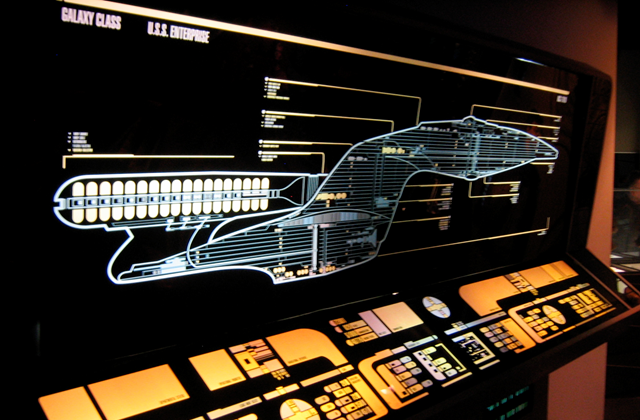 Some US$160 million spent in the process, including licensing the rights from CBS to build it so.

That the headquarters are a replica of the starship USS Enterprise from Star Trek?

It’s beyond avant-garde, and it boldly goes where no building has gone before.

Probably so the chairman, Liu Dejian, can say stuff at work like: “Make it so.” And: “I’ll be in my ready room.” And he has to be taken seriously.

Where the debate goes, be it Sovereign or Galaxy, or something else taxing to the Constitution, the Class is still out. Stick with an Excelsior refit if for no other reason than “Excelsior” is such a good word to say.

Since no known tricorder scans of the USS Enterprise building exist, the next nearest thing was to fly around it with a drone:

Whether this Star Trek building comes with its own version of Worf, Son of Mogh, or at least his alter ego, Michael Dorn, working security in some form is unknown.

Only the Q may know the real answer.

Which is the logical explanation.

And some of those gardens sure look like they could use at least one Caretaker.

The question is, can the Enterprise building count on Great Wall of China defend it against all types of Khans?

As for being assimilated, whether it’s a tale of Chinese collectivist culture or Western pop culture journeying east, is for the people to decide.

What could be next?

Epcot does kind of look like the Death Star. That Disney also now owns Lucasfilm and Star Wars may not be that much of a coincidence.

Plus Tomorrowland is speculated to have found its dystopian future in Disney’s own plans for a Utopian city. Originally called Project X, then, the Experimental Prototype Community of Tomorrow, aka the acronym EPCOT, and now simply Epcot. If the glass slipper fits…

All that’s left is disclosing the whereabouts of Stark Tower and what’s left of the Triskelion. The plans to which may be hidden in Disney’s or someone else’s secret underground lair.

Along with what may be the definitive answer to the following uthinki question: