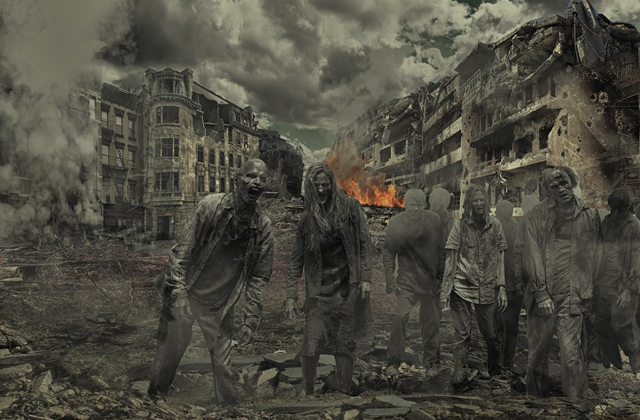 In whatever form it takes, the future zombie apocalypse, often induced by some sort of pathogen, has become something of a mainstay amongst pop culture and the entertainment industry.

Granting the ability to tell the story of humanity questioned as survival and morals are tested, with the faint glimmer of hope on the horizon.

Yet what of the science behind it?

If it’s a pathogen, then it’s not some malevolent supernatural force.

With the desperation of necessity being the mother of invention, then maybe science could find a cure and a way to save humanity?

A pathogenic fungi of the Cordyceps genus has infected humanity, turning most into zombie-like creatures. Although hope exists with someone who’s immune to the infection, and perhaps a cure can be synthesised from them.

Without going too Orson Welles on causing alarmism for the sake of a story, that’s actually the basic premise of the video game, The Last of Us.

However, what does science and scientists have to say about how it would turn out in reality?

This was the premise behind the discussion panel for the Wellcome Trust, hosted by Benjamin Thompson of the Microbiology Society. To debate and learn how a The Last of Us scenario would play out in hypothetical reality, including how the UK Government would respond to the threat.

The executive summary, is that humanity is essentially doomed under such a scenario.

Meaning all those doomsday preppers really might have the last laugh.

It should be stated that Cordyceps fungi are real, but The Last of Us video game ups it all a few notches for entertainment. The science behind Cordyceps, is that these endoparasitoids are fungi which infect and attack the bodies of their hosts, typically insects, replacing their flesh tissue with fungal growth. Ultimately killing the host in the process.

As mentioned, it’s primarily confined to insects and arthropods (entomopathogenic) though. Thus Cordyceps turning humans into bloodthirsty zombies tends towards the latter part of the phrase science fiction.

However, Ophiocordyceps unilateralis, is a real entomopathogenic fungus which influences the behaviour of the ants it infects. The parasitic fungus causes the ants to climb plants and bite into the leaves before the ants die, in order to optimally spread the fungal spores.

It gets a little grimmer for humanity surviving and finding a cure under the more extreme The Last of Us scenario.

In the panel, vaccinologist Christine Rollier states that even if someone was immune to the Cordyceps infection, reverse-engineering that person’s antibodies to cure and save humanity from the global pandemic is unlikely to work. Synthesising such a vaccine would probably take around two years initially. Then mass producing it on the scale required to save humanity in The Last of Us scenario, is unlikely some two decades after the outbreak. Since the world has gone all post-apocalyptic and all that.

The good news, at least, is that there’s no known Cordyceps fungus which infects humans or turns them into zombies.

(Or into the likeness of Ellen Page for that matter.)

Although people really are consuming Cordyceps for claimed medicinal purposes.