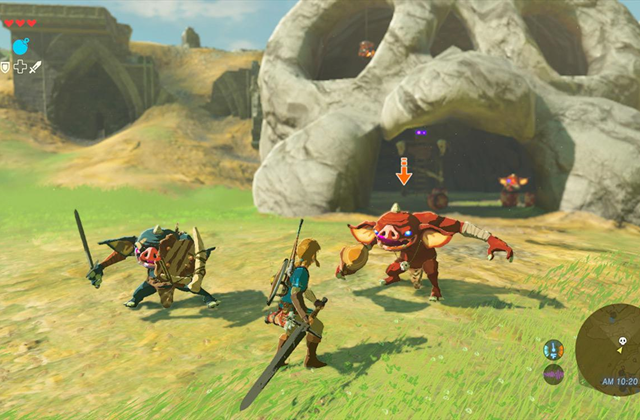 Open-World Season for The Legend of Zelda: Breath of the Wild

What Nintendo has been conveying since 2014, was that this next big Zelda game would challenge what had become stables, and arguably stale conventions, in the game series.

Amongst this has been moving to a more open-world and nonlinear style of RPG for Breath of the Wild, as opposed to the far more on-rails (and often repetitive) Skyward Sword.

Aonuma has said that in this new Zelda game, “the world is the main character”.

Certainly many gamers may recall past Zelda games, where moving around the world was a worthwhile experience in and of itself. Such as in Ocarina of Time, riding Epona around the fields, headed towards the visible horizon. Jumping fences meditatively as day shifted into night, and feeling the clip-clop of her hooves within the rumble of the controller.

How Breath of the Wild fairs in the storytelling department because of this new “the world is the main character” exploration approach will be something to watch for.

In many of the open-world RPGs, the main story may be more of an ancillary plot device and the main quest can quite frankly be disappointing at times, serving more as an excuse to go off and explore the game world instead.

Whereas the Zelda series, whilst undoubtedly featuring action and adventuring along with puzzle solving in the dungeons, has long been narrative-driven. With the player guiding Link through the familiar iterations of the story involving Princess Zelda, Ganon, and the Triforce.

For the Zelda game series canon purists, know that the female lead character in the game suspected by some fans is simply not the case. There is no playable “female Link”. Familiarity of the overarching story and balance of the Triforce remain with Link as the playable hero of the game.

The Zelda demo playable at E3, displaying The Great Plateau, reportedly only showed a mere one percent of overall game world. With Breath of the Wild said to be about 12 times the size Twilight Princess in terms of game world area.

Time once again passes in the game-world, where an hour of Hyrule-time equates to one minute of Earth-time.

Beyond this, the shake-up begins.

Players can now press a button causing Link to jump, as opposed to the scripted animations of the past. Link can also climb as well.

There’s no more slashing grass to collect hearts. In what may or more not be a nod to other RPG series, Link will now need to collect food and other ingredients to replenish his health via cooking and eating food, and mixing potions. If Link goes the full gourmet though, stick Balbus’ Fork in him because he’s probably done.

Along with no more hearts from cutting down the grass, the same is said to be true of gathering rupees. The gemstone currency is still in the game according to Aonuma, but will function somewhat differently this time. It’ll be interesting to learn how much the new rupee dynamic may solve the value of the currency issue, where the player has all this money in a Zelda game and nothing worthwhile to spend it on. While the different sized wallets in some of the past Zelda games did help somewhat to give a bit of meaning to the value of money, as the games progressed, money too quickly became worthless (even if rupees were still slavishly collected), particularly where the grass could readily be cut to harvest rupees and other equipment items.

Presumably the lack of items just awaiting to be cut from the grass in Breath of the Wild, will also extend to that other past Zelda convention of smashing pots to get things like rupees and bombs and arrows. This may not be a bad thing.

Weapons, shields and equipment, can now be acquired from enemy camps and via disarming enemies directly. The Z-targeting system also makes its return. Items such as weapons are now also subject to degradation through use, in ways beyond things like setting fire to deku sticks and the fake Biggoron’s Sword.

Clothing with reportedly also play a key role in the game; and the trailer footage shows Link wearing a suit of armour.

“If you’re going to a cold area and you drink the right type of elixir, you can go there half-naked and you’ll be fine,” said Aonuma.

Whether that should be taken in part as a gameplay reference towards Ocarina of Time-styled red and blue tunics or similar, is one of the many details about Breath of the Wild yet to be revealed. That also includes the status of Link’s trusty and traditional green tunic. It is known that the effects of desert heat and stealth will be factors affected by Link’s clothing.

Another addition will be content based upon amiibo integration. Four amiibos so far are believed to be compatible with the game. Including Wolf Link, which makes Wolf Link appear in the game to attack enemies and help find items for the player.

As previews go, with only one percent of the game world playable, the surface of this new open-world Hyrule is likely far from even getting scratched.