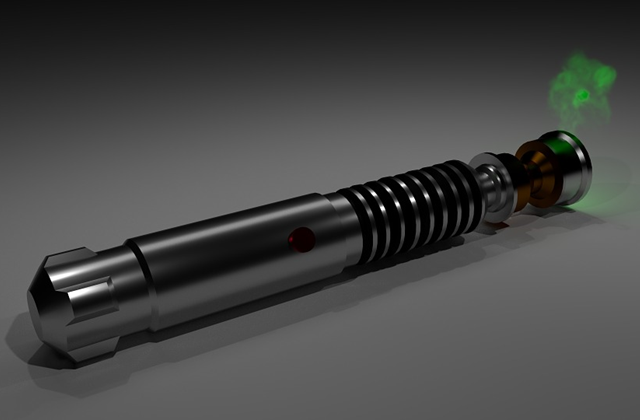 In the time around the release of Star Wars: The Force Awakens, it seems anyone capable of stringing together a few words has been devoting much of their time to punning on how the Force has truly awakened.

Fact of the matter, the Force never sleeps.

Rather it’s around times like these that Star Wars fans instead step out of the dark and into the light.

Often choosing sides in the process, but not awakening by any means.

Alhough it is rumoured a few fans have been seen inside of replica Tauntauns. But only to keep warm. Nothing else.

While many other fans have been concerning themselves with vital matters such as how to make their own slave Leia bikini out of recycled metal cans – purely for cosplay purposes – one fan in particular has turned his attention to more potentially practical matters.

Imbued with secret Jedi training to master the Force, or at least some advanced engineering and chemistry skills, YouTube user Sufficiently Advanced has built himself a real burning lightsaber in real life.

Altogether making it civilised, because it’s in sword-form.

It’s not recommended you try this at home. Given the chemicals involved (including the flammable methanol and acetone), regardless of whether you’re a Gungan or not, it could be a burning case of:

“My eyes! The goggles do nothing!”

In the video, Allen used boric acid to create the green lightsaber blade.

Excluding the Darksaber as a choice, answer away below to also find what out others think: