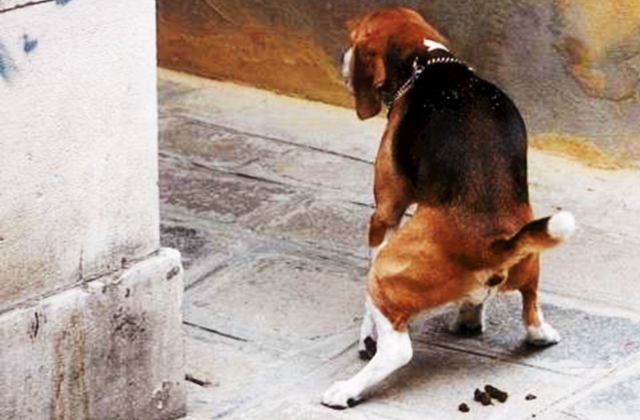 Dogs. Love them or loathe them, somewhere people are likely to be walking them. Leashed or unleashed, is less of the point here. Because no matter how well trained, at some point dogs are going to want to go to the toilet.

Maybe the dog is well trained and simply got caught short.

Maybe it’s none of the above.

The number one variety doesn’t seem to matter too much to people. Whether it’s for labelling or something else. When you’ve got to go, you’ve got to go. Even in dog-terms. And it should drain away easily enough if outside.

While Tarō Gomi assured us in his book that Everyone Poops (or by another title Everyone Eats and …), the author didn’t specifically mention that dogs poop. So that may explain some of the confusion and taboo, but dogs do poop.

The question of where dogs poo, can be of importance though. Especially in public. Whether it’s at the beach, the park, the sidewalk. Or the neighbour’s front yard.

It can also matter if the dog is on or off the leash. Did the dog’s owner see it?

It’s in the last case though, that things can go awry. Because the clean up may never be fully completed. Sure, with the clean up, they’ll put the dog poo into a plastic bag, but what happens then?

The poobaggers tend to come in two distinct varieties:

The responsible poobagger, scoops the dog’s poop, then bags and tags it. They’ll then carry around the offending package, until they pass the parcel into a bin when they find it and the music has stopped. All generally ends well. The dog defecates, and the owner cleans it up and removes it from the public place.

The lazy poobagger, similarly scoops the dog’s poop and places it into a plastic bag. Yet they then somehow feel that their duty to cleaning up the dog’s number two is done. Leaving behind a plastic bag, with a dog’s crap inside it to ferment, for someone else to worry about. Maybe they’ll be kind enough to throw the bag of poo off the beaten path, so people don’t step on it. That way the bag can burst elsewhere, leaving behind both the dog’s poo and adding a plastic bag to the environment.

It’s understandable that people do not want to carry around a bag of still warm, then cooling, dog poo with them. It’s far from the most pleasant baggage.

Having gone to the effort to bag the dog’s poo, but not put it in the bin, are they really doing anyone any favours?

Imagine if every time a dog defecated in public, the owner then proceeded to drop a plastic bag on the ground as well.

Because this is effectively what the lazy poobagger is doing. Dropping poo plus plastic bag, and then walking off.

Not only is the lazy poobagger not properly cleaning up their dog’s waste – though they are likely to argue they are at least “containing” the excrement – they are also polluting and littering by throwing a plastic bag into the environment.

In which case, unless the bagged dog poo is actually picked up and put into the bin by a responsible poobagger or someone else, wouldn’t it be better for the lazy poobagger to instead do nothing at all and simply leave the dog poo alone on the ground and let nature take its course?

Got an opinion about the great poobagger debate, have your say in the comments and answer the uthinki question below: