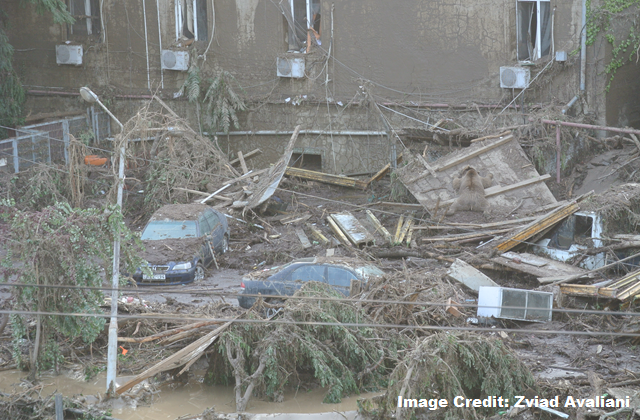 Tbilisi, Georgia, has been inundated and flooded by heavy rains which on Sunday caused the Vere River to overflow. Floodwaters in places rose as high as rooftops. Washing away cars, along with roads and buildings. Uprooted trees, mud, and debris line the streets.

Today, Monday has been declared a day of national mourning in Georgia.

Reports indicate that at least 12 people were killed by the floods, including the deaths of three zoo employees. More than 24 people are believed to be missing, and 37 people hospitalised due to injuries, according to Interior Minister Vakhtang Gomelauri.

Deputy Mayor Irakly Lekvinadze said: “Dozens of families remain homeless as their houses were destroyed or damaged in the capital.”

Georgia’s Finance Ministry has estimated the cost of damage to the capital as high as 40 million lari, approximately 0.1 percent of Georgia’s GDP. The Georgian Government is currently discussing international aid options.

Amidst the floods, also saw the escape of more than 30 zoo animals. Which included bears, lions and tigers. Those animals which did not drown in the floodwaters, spilled onto the streets and were loose in Tbilisi.

Residents were warned to stay indoors by Prime Minister Irakli Garibashvili until all the animals have been found.

Reports out of Georgia stated that around half of the animals were returned to the zoo. A hippopotamus was able to be tranquilised; however, some such as a lion and a pack of six wolves, roaming near a children’s hospital, were killed by police and special forces.

The clean-up is currently underway.