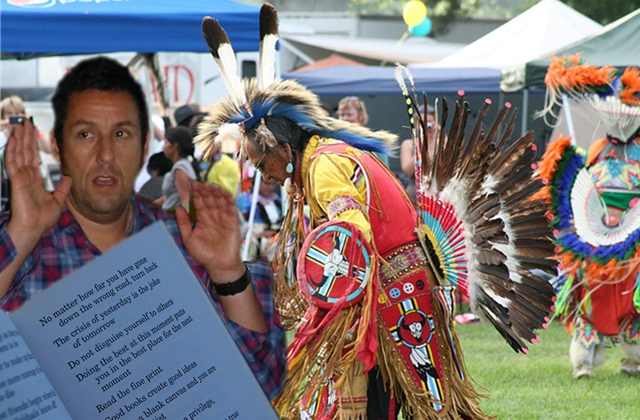 In the upcoming Adam Sandler movie The Ridiculous Six, Native American (or “Indian”) actors and a cultural advisor have walked off the New Mexico set in protest.

A general disrespectfulness of Native American culture, including bad jokes and character names such as Beaver’s Breath and No Bra, have been cited as the reasons. Further that the comedy is unfunny, racist and only serves the worn out stereotypes of “Hollywood Indians” from yesteryear, along with grossly misrepresenting the Apache culture.

That it’s an Adam Sandler and is a direct-to-streaming movie made for Netflix may be enough to say it all. Warner Bros. dropped the film months ago. Plus the film’s cast is said to also include Jon Lovitz and Vanilla Ice…

Adam Sandler in a movie as a big drawcard, hasn’t been something that’s happened in a very long while. Yet coupled with his Happy Madison Productions, Adam Sandler continues to churn out movies, raking in profits and Razzies along the way (especially of films released in 2011).

Netflix has suggested that the movie, which is a spoof of The Magnificent Seven (which incidentally, though a Western, it certainly was not about “cowboys and Indians”), is intentionally ridiculous and it’s all a joke. Furthermore that the Native Americans were being overly sensitive. Stating:

“It is a broad satire of Western movies and the stereotypes they popularised, featuring a diverse cast that is not only part of – but in on – the joke.”

The Native American actors voiced their concerns to the film’s producers.

Allison Young, one of the actors says: “They just told us, ‘If you guys are so sensitive, you should leave.’”

Jokes of cultural differences and ethnic stereotypes are fairly common in general, and common tropes in movies as well.

Much like the very old joke about how does the Indian Chief name a newborn child? In the morning, he looks out of his tipi and it’s the first thing he sees. Why do your ask, Two Dogs F-

Acknowledging some may find it funny and others may find it offensive, is it that such clichés of “cowboys and Indians” belong in the past? Or that they can be joked about today? Have people become too sensitive, what you do think?