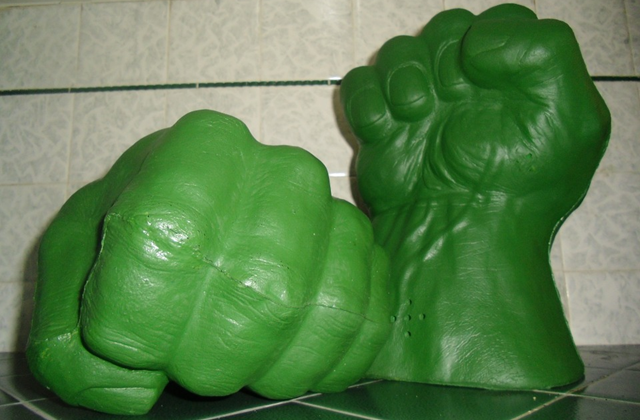 Actor Mark Ruffalo has shown off a pair of Hulk fists from the set of Marvel’s Thor: Ragnorak, currently filming in Australia.

Mark Ruffalo also offered a sentiment shared with Kermit the Frog, that it’s not easy being green.

Though the actor seems to be enjoying it much more than the Muppet.

Hello from the set of #Thor3! As you can see, I’ve got my hands full. It ain’t easy being green….@thorofficialhttps://t.co/PnYTnX8n96

The Thor: Ragnorak (2017) movie plot is rumoured to be a mix of the Ragnorak and Planet Hulk storylines.

Apart from the titular Thor (played by Chris Hemsworth), this also allows Marvel to bring the Hulk (played by Mark Ruffalo) into this Marvel Cinematic Universe (MCU) film and avoid the distribution issues related to Universal holding such rights for standalone Hulk films.

Hulk may smash such inconveniences, but the more Bruce Banner-like approach is smarter.

The Jane Foster character (played by Natalie Portman in the first two Thor films) won’t feature in this outing. With rumours that the setting of the film won’t be Earth but more cosmic, and Thor’s human love interest will be traded for more of a buddy-movie feel with the Hulk.

Of course the God of Thunder and the Green Goliath have notably clashed before in the comics and on the screen, often in a frenemy sense.

It’s also rumoured that Thor: Ragnorak will inject more humour into the series. With director Taika Waititi at the helm, who’s known for quirky films such as Boy (2010), What We Do in the Shadows (2013) and the much lauded recent Hunt for the Wilderpeople (2016), there could be some truth to the comedy angle.

Maybe it’ll address the burning question of what would happen if Bruce Banner had a beard and turned into the Hulk, would Hulk then also have a beard?

Such bittersweet questions could be more than a nod to the Maestro, where the alternate future-self may also serve to discourage males attempting to look like the Hulk in real life.