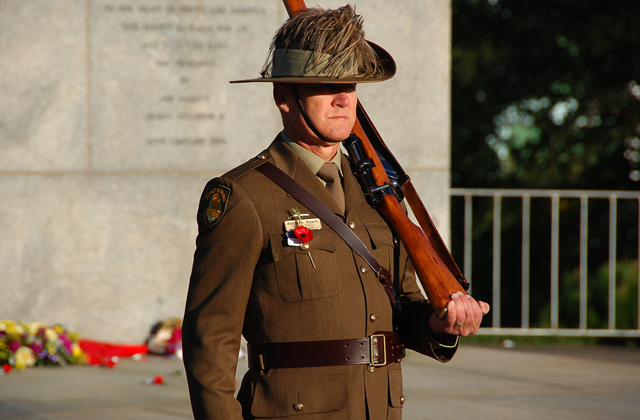 The pre-dawn world is dark. No hint of the sun yet to rise somewhere to the East.

There’s a certain silence to it all. Rather fitting given the solemnity of the day.

People move about the streets. More than normal in a time which is normally the preserve of the few early risers and late workers.

Hurriedly they move and file in. Cram into and close ranks about the memorial site.

Those of age and those distinguished are given seats. Most stand, almost still. In the dark waiting.

The odd child stirs, shifts and murmurs. Some are placed atop shoulders to better see in the gloom. Others are held closer. Urged into silence.

Each here is a part of the centenary of Anzac Day.

That we remember those before us is the request.

That we do not repeat past mistakes is understood and need not be spoken.

Light is cold and grey. Clouds reach across part of the sky.

Below, sodium lights burn in a suffused orange glow.

And it’s here that something goes awry.

For as much as marking 100 years of Anzac Day may be more significant to some than in other years, the day – and especially the dawn service – has often been about marking respect. Quiet and in deference.

The fun and laughter will come afterwards.

As a nation, Australia has done much to protect the values of the Anzac spirit and prevent its commercialisation.

Yet here, on the day itself and at the dawn service no less, are the speeches from politicians. All self-congratulating themselves for allocating funding for this particular Anzac Day.

If people were so easily riled by Woolworth’s ‘Fresh in Our Memories’ ad campaign that it was promptly pulled, why is that politicians can make such speeches and nothing is said?

It was not that such speeches made a brief mention of funding either. A word and on with the job. Or a larrikin remark or two. Either would have been acknowledged and accepted in the spirit of the occasion.

Rather they droned on for the much of the length of their speeches about how they and their political parties had procured funding.

No doubt the speeches were repeated throughout the day.

Hopefully such speeches were the exception here, and not the case at every Anzac Day ceremony.

Yet there was something disrespectful about it all the same. And the unwanted aftertaste continues to linger.