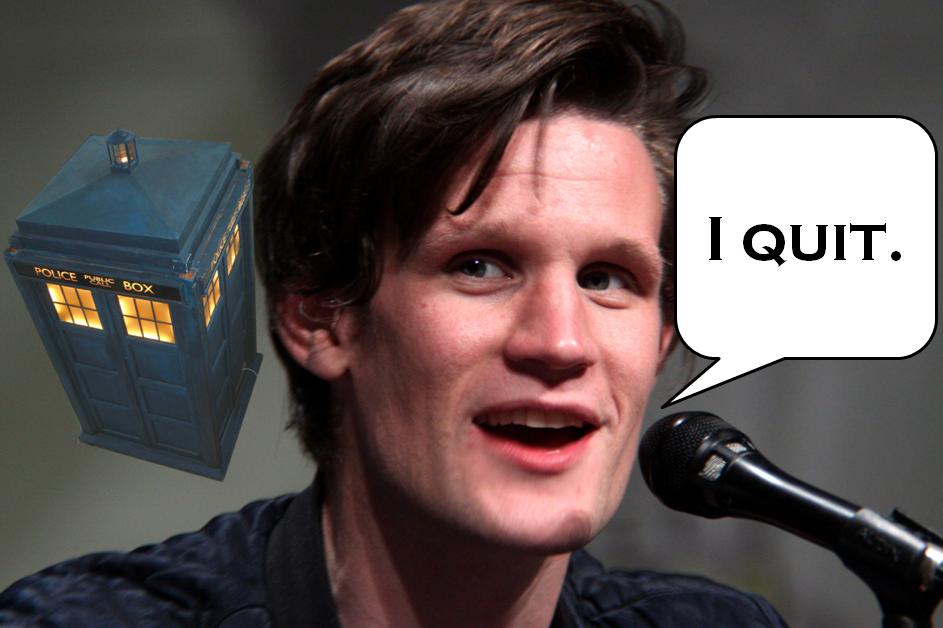 The Eleventh Doctor to Leave

Matt Smith, the actor behind the current Doctor Who (and the Eleventh Doctor) recently announced that he will be quitting the show.

Series 7 ended with a cliff-hanger and the caption:

INTRODUCING JOHN HURT AS THE DOCTOR

Will John Hurt be the Twelfth Doctor?

Probably not, but that’s travelling ahead in time anyway.

Given that the show began running back in 1963 on the BBC, it has needed a means to shift between the actors playing Doctor Who.

However, this is accepted because as a Time Lord, Doctor Who has the ability to regenerate when near death.  Each time he is effectively reborn, there is the retention of the past personalities, the memories and the shared consciousness, yet the new incarnation will have its own characteristics as well.

Whether it is that Time Lords can only regenerate the suggested 12 times remains to be seen.

Who was The Doctor Then?

Each actor has added their own twists to the character.  Often with questionable fashion choices along the way.

David Tennant’s portrayal of the Tenth Doctor was arguably considered the most stylish.

Others, not so much.

Consider the following:  Matt Smith’s portrayal of the Eleventh Doctor was a big fan of the bowtie.  Tom Baker’s Fourth Doctor sported the scarf.  The Seventh Doctor, as played by Sylvester McCoy, was unlucky enough to wear a silly hat.  Whilst Christopher Eccleston’s Ninth Doctor rocked out with the black leather jacket.

Not exactly happy days in the world of fashion.  Even with the intergalactic ability to time travel.

The Doctor will See You Now in Popular Culture

The time travelling science fiction series has added a lot to popular culture in its 50 year tenure.

From the sonic screwdriver (the non-violent non-weapon of choice) to the sentient time travelling police box known as the TARDIS (Time and Relative Dimension in Space).  The latter also being the real estate agents’ dream of being bigger on the inside than it looks from the outside.

There have been the villains as well.  The Daleks, maybe looking somewhat like R2-D2 from Star Wars, but predating all that and with a sort of soft amphibian-like centre.  (Any Jar Jar Binks mentions will be made to “exterminate” here.)

The Cybermen in the more recent series also seem to have shared a rather uncanny resemblance to Marvel’s Ultron.  Or maybe it’s the other way around…  Additionally the Series 7 episode Nightmare in Silver, had the Cybermen variants appearing almost Borg-like from Star Trek.

With the 50th anniversary of Doctor Who looming, there is question of how many of the actors that previously have played the Doctor will be in the upcoming special double episode.  (Hopefully more than the supposed James Bond actors get together for the Bond franchise’s 50th anniversary.)

Who is the Next Doctor Who?

Steven Moffat, the show’s executive producer says:  “Somewhere out there… is someone who’s about to become the Doctor.”

Which is about as informative as knowing that the first of the 50th anniversary double episodes will screen in November, and that November is out there and it usually arrives after October.  On the plus side, at least it gives something to the fans that the show will continue.

Current fan speculations on the actor whom may play the next Doctor Who include John Hurt, Idris Elba, and even Helen Mirren.

Who do you want to see play the new Doctor, voice your opinion in the comments below.  How many times can he really regenerate?  This also leads to the important question about the future of both Doctor Who and Doctor Who, which will be revealed by pressing the uthinki button below.  The button is a bit like the TARDIS, it’s also bigger on the inside…