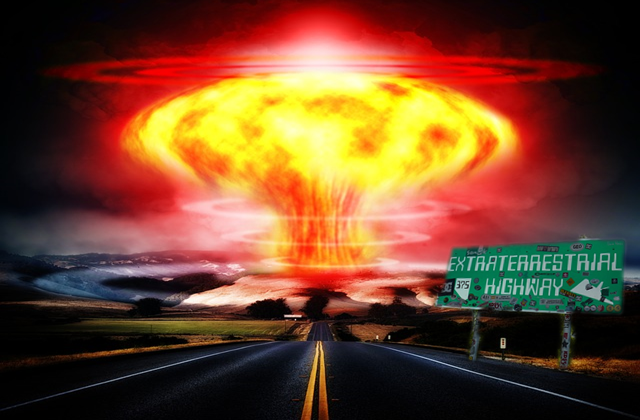 He was the sixth man to walk on the moon as part of the Apollo 14 mission, but with Edgar Mitchell claiming that aliens prevented nuclear war between the USA and Russia during the Cold War, some are wondering whether it’s time to decommission what may be a celestial object with a decaying orbit.

“White Sands was a testing ground for atomic weapons – and that’s what the extraterrestrials were interested in.

“They wanted to know about our military capabilities.

“My own experience talking to people has made it clear the ETs had been attempting to keep us from going to war and help create peace on Earth.”

There is, however, no public record of any encounters of the Third Kind (close or otherwise), nor of verified UFO sightings at NASA’s White Sands Test Facility in New Mexico. The area is part of where the first nuclear bomb was detonated, on 16 July 1945. It’s also near Roswell, where it’s claimed that aliens crashed landed on Earth in July 1947.

As for Area 51, it exists as NASA has confirmed it, but there are no aliens there.

There’s also a rational explanation for what really happened at Roswell in July 1947, and it didn’t involve aliens and UFOS.

“UFOs were frequently seen overhead and often disabled their missiles.”

“Other officers from bases on the Pacific coast told me their [test] missiles were frequently shot down by alien spacecraft.”

The major issue of Mitchell’s claims, even for UFO researchers, is that they largely appear based on anecdotes and stories others have told him. His sources have remained unnamed, and Edgar Mitchell has not experienced or interacted with aliens or UFOs firsthand.

There’s no physical evidence of extraterrestrial technology disabling the missiles; and rational explanations of stealth planes and industrial espionage – and simple missile failure – apparently account for what would otherwise be UFOs.

Edgar Mitchell has acknowledged that many of his claims can’t be proven and are speculation on his part. He does believe in UFOs nonetheless.

When it comes researching UFOs, there are no shortage of conspiracy theories. However it’s often best to investigate the evidence; rather than merely connecting the dots on things which apparently make sense and people want to see and believe in, and pareidolia unfortunately makes this quite easy.

Lacking any real evidence though, opinions are what they are.

Maybe peaceful aliens are out there, watching and guiding the development of humanity. Then again, maybe they aren’t.

So unless ET phones in from home with the definitive answer, use your opinion to answer the uthinki question below: