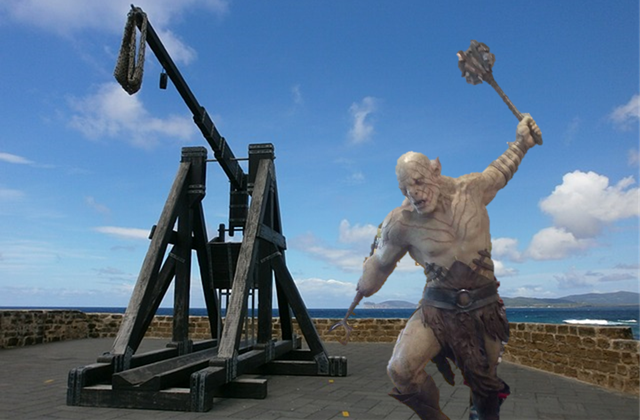 Perhaps because it’s easier to destroy than create, there’s an attempt to destroy Minas Tirith before it can even be realised.

Whether made from the slimes of the earth or being from corrupted Elves, a group of purported Orcs are making their own crowdfunding attempt to: Destroy Minas Tirith.

The Orcs want to raise via crowdfunding, £1 million to destroy Minas Tirith, the capital city of Gondor.

Compared to the £1.85 billion Tolkien fans want to crowdfund the building of the White City, it’s a strange fate that they should suffer so much fear and doubt over so small a thing. Such a little amount.

Now it may be that the forces of Mordor seeking to destroy Minas Tirith are not Orcs alone. Or even the Uruk-hai. They may have a cave troll. Or worse, an internet troll. They could also be Olog-hai, and able to survive sunlight on their own. Though perhaps the Dark Lord’s power keeps them safe from sunlight regardless, even beyond the Black Gate. For the Eye of Sauron is ever-watchful.

Or so says the words of J. R. R. Tolkien and his books.

And there’s no doubt that Shagrat is the greatest name ever. Whether for an Orc, or an Austin Powers impersonator (who’s a sexy fell beast), or anything else that can be said in the Black Speech.

The Orcs want to buy many pointy and shiny things which they can stick the humans with.

The Orcs probably also want catapults and crowdfunding to make other cunning devices to hurt and destroy beautiful things, like the White Tower of Ecthelion. Which glimmers like a spike of pearl and silver, with its banners caught high in the morning breeze. Calling its people home by the clear ringing of silver trumpets.

Or they could instead crowdfund to build and realise Minas Tirith.

A side must be chosen by Tolkien fans and the Tolkien Society alike.

Some will be tempted.

Others, they dare not give to either. Not even if a refund will keep their money safe.

Understand, some would use crowdfunding from a desire to do good… But through them, it could wield a power too great and terrible to imagine.

Crowdfunding is a gift.

It could be a gift to the foes of Mordor.

Or it could be a gift to the foes of Gondor.

Why not use this crowdfunding?

Long since the start of August have the Stewards of Gondor, attempted to realise Minas Tirith and keep the Orcs and the forces of Mordor at bay.

By the donations of people can the lands for Minas Tirith be kept safe.

Or left unbuilt and in ruins.

Give Gondor the weapon of the enemy.

Let them use crowdfunding against them.

Or should the strength of Men fail, then crowdfund the Orkish enemy.

Which King, or Witch-king, will succeed? Even if there’s only one Lord of the crowdfunding, and he does not share power.

Maybe the Army of the Dead will save the day? Even if the Dead Men of Dunharrow would only serve as an improbable and overtly convenient plot device in the movie.

But the ghosts did bring things to a rapid conclusion. It worked here as well. So answer away: