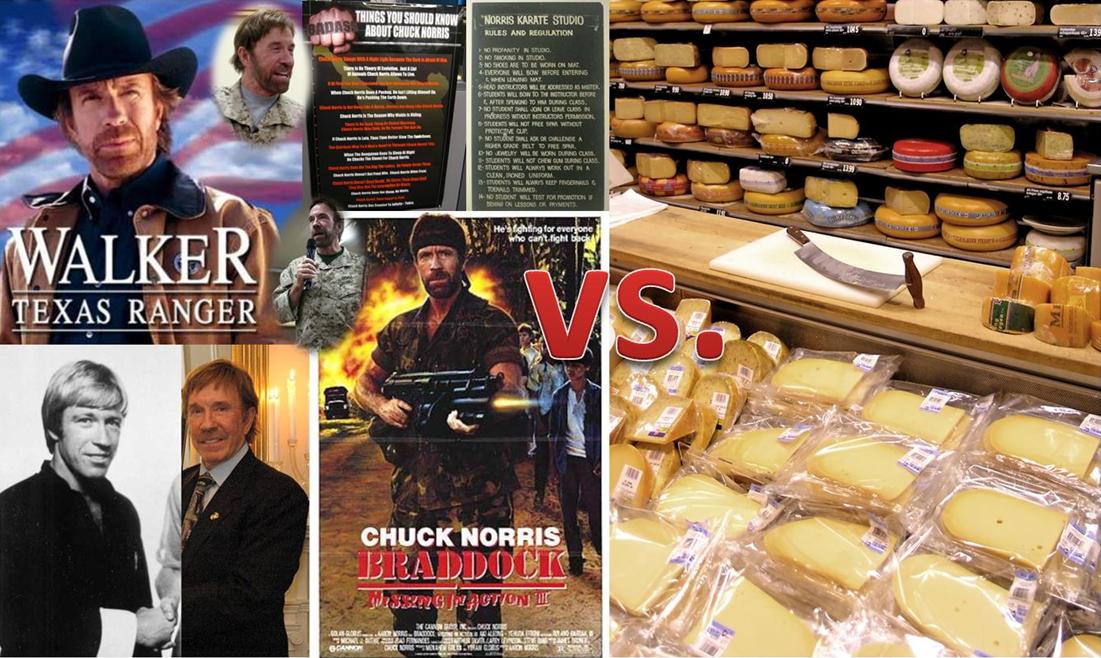 Chuck Norris versus The Cheese Wheel

Some claimed that the recent sightings of Chuck Norris without a beard were as rare as seeing the Loch Ness Monster.  (Just in case you were wondering, yes, Chuck Norris would win in a fight between the two.)

Despite the claims, Chuck Norris does not always have a beard.

Perhaps he’s so manly he was born with a beard, but that also makes him man enough that he could shave it off.  If, and when, he wanted to.

Besides, as the photos show, clearly Chuck does not always sport a beard.

And there are two things in this world that you don’t mess with:

Two, a montage.  You can’t argue with a montage.  Once something is in montage form, there is no fighting it.  It’s designed to win.  Just like Chuck Norris.

Neither of the above may do much to dispel the rumour that behind Chuck Norris’ beard is another fist.  Besides, his chin is as tough as a fist anyway.  Another one for the Chuck Norris Facts file.  Think about it.

People don’t punch Chuck Norris in the face, he lets his face smash their fists.

Anyway, to celebrate all things Chuck Norris, he has successfully been placed on The Cheese Wheel for this week.

It’s a beardless Chuck Norris versus The Cheese Wheel.

Chuck has survived Missing in Action on three occasions; years of being Walker, Texas Ranger; and (somehow) even Sidekicks.  He has only ever been defeated once, and that was by Bruce Lee in Way of the Dragon.  (There were scripting problems apparently.)  Even the mighty Ben Stiller had to wait until the credits were rolling to utter a phrase that kind of rhymed with Chuck…

Will Chuck manage to triumph over cheese?

Time to decide exactly what type of cheese Chuck Norris may be.  The selection to choose from will only be revealed by clicking on the button below.

Surely even the man, the legend himself, Chuck Norris, would say: