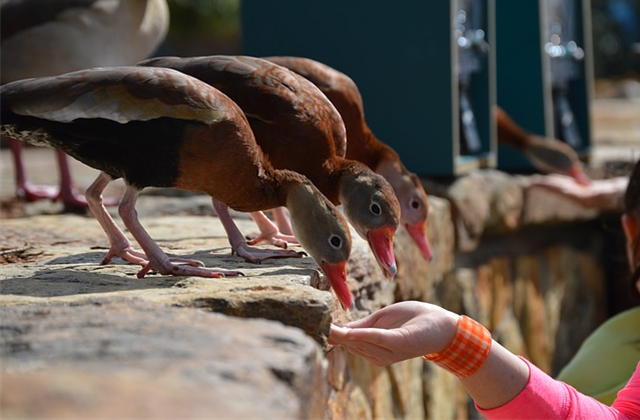 Londoners have been given a simple request: Please don’t feed the ducks bread.

The Canal & River Trust are the ones currently making this request. With it comes a warning as well. Apart from the estimated six million loaves of bread annually entering London’s canals and waterways, it’s being warned that bread is like “junk food” to ducks. Suggesting that the diet for the ducks would better include handouts of lettuce, peas and corn, oats, seeds, and rice. Grapes are apparently also acceptable. Portion control and varying the places of feeding is encouraged as well.

Much like the path to hell may be paved with good intentions, for ducks it may be paved with bread loaves. Which has nothing to do with Hansel and Gretel because it’s not just breadcrumbs. Although it is about fatted ducks of sorts. Problem is, the bread that is housing itself in the waterways is not of the ginger variety. Excesses of bread are instead giving rise to rodents, diseases, and algal blooms amongst other things. It’s environmental foie gras too indulgently frequent to be healthy.

Quite apart from asking and awareness, a major challenge in stopping people feeding bread to ducks may well require overcoming that staple of lunches: the sandwich. With bread either side of some filling, there’s usually enough of it give a piece to an inquisitive duck without much passing thought. Tearing a piece from the bread to feed to the ducks probably doesn’t seem like that big of a deal. In cities, workers often head to the parks for their lunchbreak. Bringing with them the ever portable sandwich. Bounded as it is by bread. This is probably less likely for breakfast or dinner.

The current push to stop people feeding ducks bread isn’t the first attempt either. In 2013, the Slice of Life campaign, also encouraged people to stop feeding the ducks bread, because it was better fed to humans instead.

However, it’s not merely the odd piece or two of bread that is causing the problem in the waterways. Feeding the ducks in the parks, tends to be a pastime both of childhood and present. Adages of chips for seagulls and bread for ducks are recalled. Along with memories of the domineering and angry goose (which at times was also a bird) bullying for bread.

Over 80 percent of London duck feeders admitting after the park, they’ll throw the remainder of entire loaves of bread into the canals. Those estimated six million loaves per year, translates into a lot of bread. Busloads in fact. Bread isn’t the only thing lurking in the waterways either, London’s sewers have also been known to house dreaded fatbergs. Agglomerations of solidified fat, oil, food scraps, wet wipes, and any other debris which can be assimilated.

So the push to clean up London’s waterways isn’t that that the ducks are necessarily going gluten free, or paleo. (In mentioning the ancient, don’t forget crocoduck, creatively evolutionary as it may be. Because anything could be hiding in those waters, a bit like Nessie.)

Rather it’s about humans interacting with the environment, and how to alter public perception and behaviours. Whether it’s simply stopping excess loaves of bread entering the waterways, or stopping the killing with kindness through making suitable foods more readily available and convenient to feed to the ducks. There are many approaches which could be taken. Will one finally be successful in overcoming the breaded tradition? What are your thoughts?