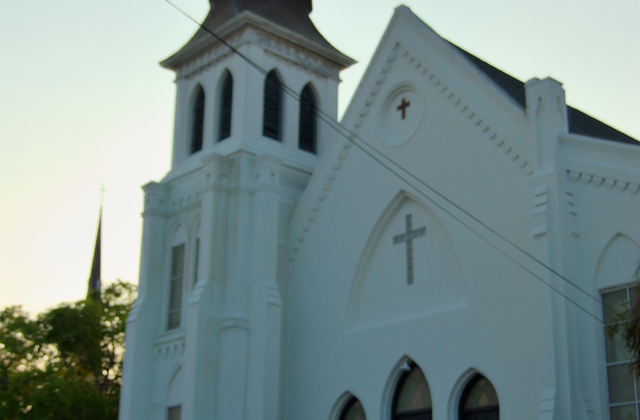 In what has been described as a hate crime, nine people have been gunned down in the Emanuel African Methodist Episcopal (AME) Church in Charleston, South Carolina, USA.

On Wednesday evening, 17 June, around 9pm local time, a white gunman who had entered the church began opening fire, shooting and killing nine people. Another person was taken to hospital.

The suspect is described as a white male, in his twenties, and is clean-shaven with a slender build. Police have said he was wearing a grey sweatshirt, blue jeans and boots.

One man fitting the description, with a backpack, was taken into custody by police.

However, the police are continuing to look for the shooter, even as a helicopter circles overhead and police patrol the area.

The FBI has also been reported as on the scene.

The shooter was described as “evil” by Charleston Mayor Joe Riley, in the following statement:

“This is an unspeakable and heartbreaking tragedy in this most historic church, an evil and hateful person took the lives of citizens who had come to worship and pray together”

Chief of Police Gregory Mullen described the situation as:

“It is unfathomable that somebody in today’s society would walk into a church when people are having a prayer meeting and take their lives.”

Every Wednesday evening, a Bible study occurs in the Emanuel AME Church. Yet in the wake of the shootings, a group of Charleston community members formed a prayer circle in the street.

Leading the prayer service, Reverend James Johnson, said: “We pray for the families, they’ve got a long road ahead of them.”

At the time of writing, the manhunt continues with the gunman still at large and yet to be caught.

With a black church congregation and a white gunman, do you believe this was a hate crime and racially motivated? Have your say by answering the related uthinki question below: