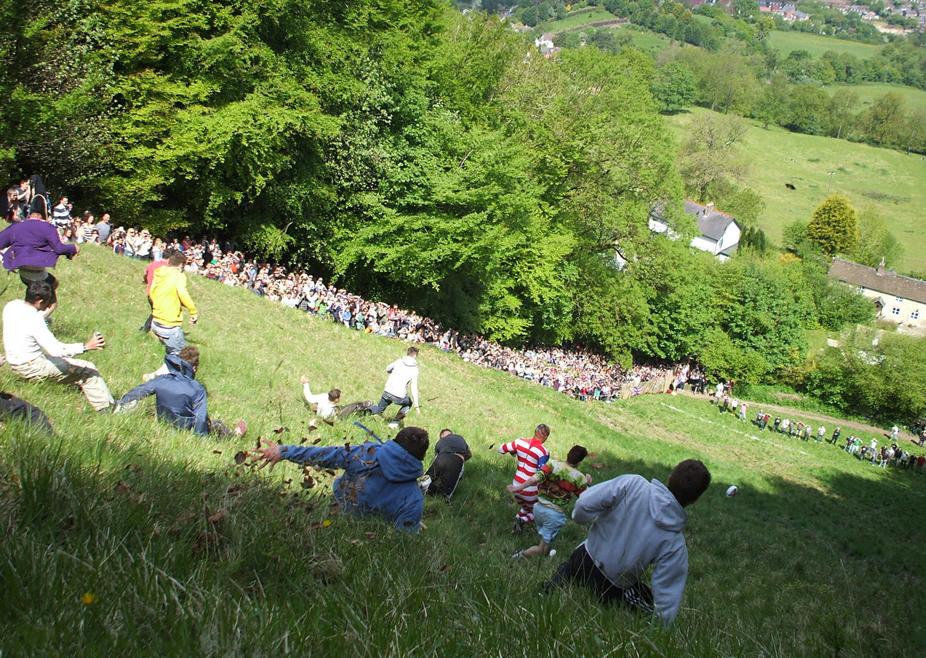 Gloucestershire gets The Cheese Wheel

Gloucestershire, England, a place that truly understands The Cheese Wheel.  And also cheese!  Not only do the good folks understand cheese, but they are willing to roll a wheel of it down Cooper’s Hill and chase after it.

Sure it may be an unofficial event, but that didn’t stop around 3,000 people turning up for it this year.

Gloucestershire Cheese Rolling dates back to the 1800s.  More official times you see, at least up until 2010.  Then, fearing for people’s health and safety the event was officially cancelled.  As if those things should get in the way of chasing a wheel of cheese down a hill so steep that most can’t even normally stand on its side without falling over.  It’s just a plain fun idea.

Too much fun in fact.

Police warned local cheese-maker Diana Smart against supplying her Double Gloucester Cheeses.  She has made the 3kg wheel of cheese for the events for the past 25 years.

The solution, keep it unofficial and chase a foam copy of the cheese down the hill instead.

Sure foam isn’t cheese, and sure you may not yet know enough about it, but you can find out all about it at The Official Site Of Cheese Rolling At Cooper’s Hill In Gloucestershire.  And if it’s on the internet, you know it’s important.  It is chasing cheese we are talking about!

Actually catching the cheese wheel as it rolls down that steep hill, near Brockworth, is next to impossible.  Of course, that’s another story.

Enough words though, when a video can say so very much more:

The Gloucestershire Cheese Rolling will – unofficially – return in 2014.  The Cheese Wheel will officially return much sooner.