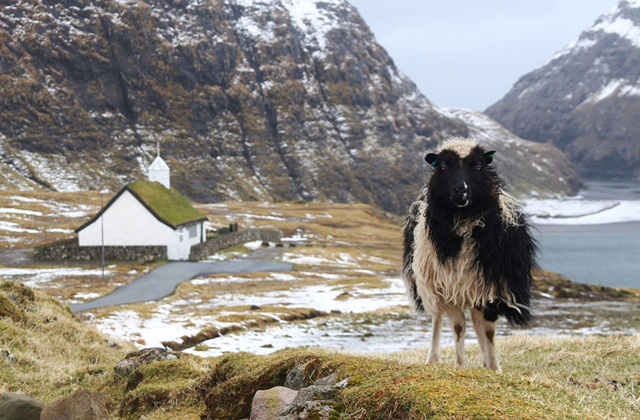 Sheep Cam: From Google Maps to Sheep View on the Faroe Islands

Remoteness and islands often go together, and sometimes by design technology on said islands can be a bit hard to come by.

Outside of the technologically advanced secret islands of evil geniuses that is.

The Faroe Islands in the North Atlantic Ocean are channelling something more like Doctor Moreau than Dr. No in the unlikely alliance between sheep and Google.

Bizarre but true, since the archipelago of the Faroe Islands is so remote, Google had not photographed them for Street View in Google Maps.

Google does allow individuals to independently contribute photos to Street View, and some of the locals also aimed to get the company to come and photograph the islands.

Meanwhile, a few other Faroese had a different idea:

Put cameras on some of the 70,000 plus sheep living on the islands and let them photograph away.

Google flocked to the idea, and has since loaned its official Street View equipment and 360 degree cameras to aid in mapping and photographing the Faroese Island properly with the help of the sheep.

Google’s motto may be “Don’t be evil” but since it restructured to Alphabet, it could be too easy to slide down that slippery slope from sheep-cam to sharks with frickin’ laser beams attached to their heads. Where the next step is setting up cameras in an evil petting zoo…

(Oddly enough a shark with a laser attached to it has already happened.)

Aside from such jests, the Google “Sheep View” mapping project could open up a whole new way to see the world from the perspective of animals beyond the farmyard variety sheep.

There would be ethical considerations, much like places in San Francisco, USA, which banned Google Glass, albeit this would involve considerations towards both the rights of animals and humans alike.

Including issues of privacy, with the obvious applications of such technology to espionage and spy-craft. Although likely more serious than things akin to the claims of the spy dolphin, and different to controlling to the animals directly like the research on remote-controlled cockroaches equipped with cameras.

Nonetheless, animals with wearable camera technology could extend research beyond merely mapping their movements (like with tagging) towards something more like seeing what they see in their environments.

Which also reaches beyond filming them, with live feeds like PandaCam, or Sloth Cam, or the elusive Sea Otter Cam.

Whether it be with highly migratory species, like getting a bird’s eye view of the sky with albatrosses or mapping the depths of the oceans with sperm whales.

Or something so apparently mundane that it’s almost unexpected, like seeing the city from the perspective of a sewer rat or a seagull.

The possibilities are there and the technology is improving, but where will it take us?